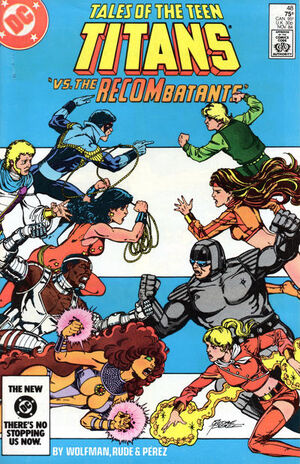 At Dayton Labs in Nevada, scientists have created artificial intelligent life in the form of four super-powered humanoids: Aurora, who can create realistic illusions; Dreadnaught, who possesses super-strength; Topaz, who controls magnetism; and Pseudos, who is a shape-changer. Learning that they are slated for destruction by their creators, the four Recombatants escape into the streets of Las Vegas, where the Titans are summoned to battle them. After an inconclusive skirmish, the two teams agree to return to the lab together. Revealing that Aurora accidentally caused two men to suffer fatal heart attacks during the Recombatants' escape, the scientists declare that the four artificial beings must be destroyed, but the Titans defy them. In the confusion, the Recombatants flee. Realizing that they will never be allowed to live normal lives, they deliberately blow up the lab's central core, preventing the creation of further artificial life, and destroying themselves in the process. Meanwhile, back in New York, Gar Logan begins planning Donna Troy and Terry Long's wedding celebration at Dayton Estates, and Terry receives some unexpected wedding presents from his students. After the Titans return from their mission, Joe Wilson attempts unsuccessfully to help the stricken Raven.

Retrieved from "https://heykidscomics.fandom.com/wiki/Tales_of_the_Teen_Titans_Vol_1_48?oldid=1673254"
Community content is available under CC-BY-SA unless otherwise noted.