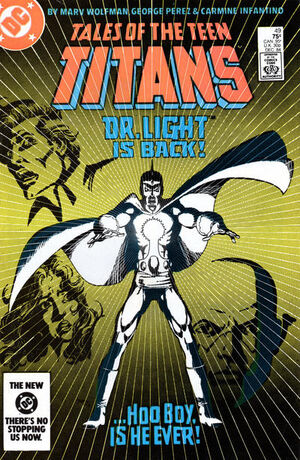 Appearing in "The Light That Failed"Edit

Synopsis for "The Light That Failed"Edit

The Teen Titans and their friends and Terry Long's family prepare for Terry and Donna's wedding ceremony the following day. In Central City, Wally West and Frances Kane witness a bank robbery staged by Dr. Light. Although use of his super-speed now causes him extreme pain and he suspects that his powers may be killing him, Wally insists on going into action, albeit invisibly, to stop the super-villain. When Wally is injured, Frances uses her magnetic powers to defeat Light, and the police arrest him. Humiliated at being beaten by a foe he never even saw, Dr. Light swears to give up his criminal career. Wally and Frances then rendezvous with the Flash, who confirms the diagnosis that the effects of the accident that created Kid Flash on Wally's changing adolescent body chemistry are responsible for his seemingly fatal illness, for which there is no known cure. Despite his despair, Wally phones to confirm his attendance at Donna's wedding.

Retrieved from "https://heykidscomics.fandom.com/wiki/Tales_of_the_Teen_Titans_Vol_1_49?oldid=1462631"
Community content is available under CC-BY-SA unless otherwise noted.