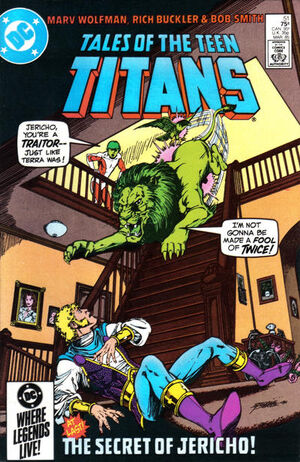 Appearing in "The Jericho Imbroglio!"Edit

Synopsis for "The Jericho Imbroglio!"Edit

The Teen Titans, aided by Lilith, defeat a gang of gun-runners in the employ of President Marlo of Qurac. The next day, Marlo hires Cheshire, who abducts Adeline Wilson, Jericho's mother, a former agent of his who had stolen information on the military strength of Kyran, a bordering nation which he intends to invade. Meanwhile, Pentagon officials inform Nightwing that Joe and Adeline Wilson are wanted for questioning by Interpol. When Nightwing tells Changeling of this, Gar, already suspicious of Joe, attempts to arrest him. Jericho, anxious to pursue his mother's kidnapper and unable to make Changeling listen, defeats Gar and escapes. At the same time, STAR scientists discover an alien spaceship and its pilot frozen in the ice in Alaska.

Retrieved from "https://heykidscomics.fandom.com/wiki/Tales_of_the_Teen_Titans_Vol_1_51?oldid=1462635"
Community content is available under CC-BY-SA unless otherwise noted.