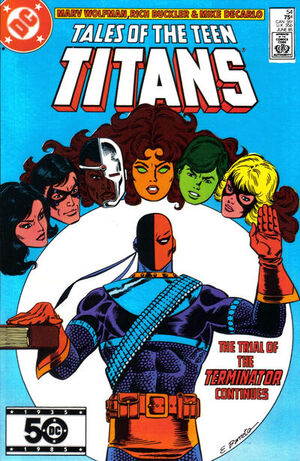 At Slade Wilson's trial, when it begins to appear as if the Terminator will escape punishment for his crimes, Changeling uses his shape-changing powers to attack Wilson. Subdued by his teammates, Gar Logan is ordered from the courtroom by Judge Adrian Chase. The Teen Titans suspect that someone is posing as the Terminator to make it appear as if the costumed mercenary and Slade Wilson are not one and the same, so they arrange a meeting with Wilson's associate, Wintergreen, only to be attacked by the Terminator impersonator. Unfortunately, the ersatz Terminator manages to escape before he can be apprehended. At the same time, unknown to the other Titans, Cyborg returns to STAR Labs where preparations are underway to replace his metal body parts with flesh-colored plastic, thus restoring his human appearance. After appearing as a witness at the trial, Lilith privately reveals to the Titans that she had experienced her unexplained heal powers on previous occasions and that they were not caused by the proximity of the winged alien. Angered at the Titans' unyielding pursuit of the extra-terrestrial, she leaves the group. Back in court, Judge Chase determines that while there is insufficient evidence that Slade Wilson is the Terminator to warrant a full jury trial for his kidnapping of stock-broker Samuel Abrams, Wilson will nonetheless be sentenced to a year in prison for illegal possession of firearms. Changeling is dismayed at this verdict: he had used Steve Dayton's Mento Helmet to masquerade as the Terminator in hopes that Wilson would he set free, so that Gar could kill him for his involvement with Terra.

Retrieved from "https://heykidscomics.fandom.com/wiki/Tales_of_the_Teen_Titans_Vol_1_54?oldid=1462641"
Community content is available under CC-BY-SA unless otherwise noted.