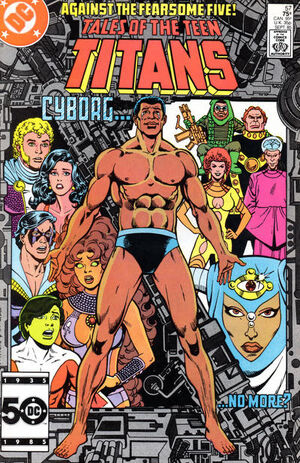 Appearing in "A: The End of Cyborg! B: New York Nightmare! C: None of the Above!"Edit

Synopsis for "A: The End of Cyborg! B: New York Nightmare! C: None of the Above!"Edit

At Titans Tower, Dick, Donna, and Kory recuperate from their battle with the Fearsome Five, together with Gar and Joe, while at STAR, Victor Stone, his cyborg parts successfully replaced with plastic, undergoes recuperative physical therapy under the direction of Dr. Sarah Charles. The Fearsome Five recruit the sorceress Jinx to their cause, but are unable to release Neutron from his confining radiation-proof capsule without aid. Days later, having heard nothing from Cyborg, the Titans learn of his operation from his grandparents, while the Fearsome Five decide to abduct Dr. Jenet Klyburn to help them free Neutron. Both groups converge on the STAR facility, but the super-villains arrive first and kidnap both Dr. Klyburn and Victor, whom they fail to recognize as the former Cyborg. Back at the criminals' headquarters, Victor manages to rig Neutron's capsule to explode, so that he and Jenet Klyburn can escape in the confusion. As they do so, however, Victor collapses when his body begins to reject its new polymer replacement parts. The next morning, Psimon's image appears at a hastily convened mayoral press conference to demand the surrender of New York City to the Fearsome Five.