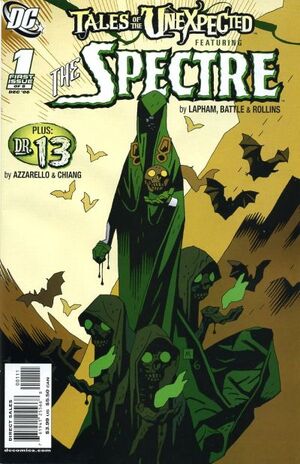 It's time to pay for your sins at the hands of the Spectre.

Appearing in "The Cold Hand of Vengeance!"Edit

Synopsis for "The Cold Hand of Vengeance!"Edit

Gotham City detectives Josh Azeveda and Marcus Driver investigate the murder of Granville Towers landlord, Leonard Krieger. The spirit of Crispus Allen looks onward, watching the cops conduct their investigation. Krieger was handcuffed to a boiler pipe in the basement of the building and left to die.

Allen begins wandering from apartment to apartment looking for viable suspects. Nearly everyone had a reason to see Krieger dead, but unless he knows for certain who the murderer is, he is unable to exact vengeance upon anyone.

After playing witness to several acts of violence, he finally discovers that a tenant named Peter Pullito murdered Krieger because he caused the deaths of several of Pullito’s pet rats. Allen calls upon the power of the Spectre and releases a pack of rat corpses that torment Pullito, ultimately causing his death.

Suddenly, Traci wakes him up and tells him of a telephone call from the Premier of France. The Premier asks Dr. Thirteen’s assistance in investigating a strange airplane crash in the French Alps.

Terrence and Traci fly to the sight where they find the ruins of the plane, but no evidence of the crew. As they continue their search, Traci notices what appears to be the legendary abominable snowman. Her father points out, that appearances can be deceiving and that there is no such thing as an abominable snowman. In this instance at least, Doctor Thirteen is correct – as the "Yeti" in question turns out to actually be a vampire. I... Vampire.

Retrieved from "https://heykidscomics.fandom.com/wiki/Tales_of_the_Unexpected_Vol_2_1?oldid=1462867"
Community content is available under CC-BY-SA unless otherwise noted.