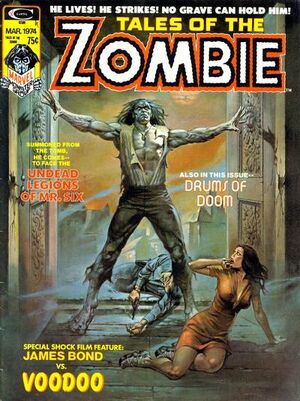 Appearing in "The Law and Phillip Bliss Part 1"Edit

Synopsis for "The Law and Phillip Bliss Part 1"Edit

Continued from last issue... The Zombie has just killed Moira Mason, and is attacked by the Voodoo practitioners who would have sacrificed her to the Lao. No matter what the Voodoo cultists try, nothing seems to be able to stop the Zombie, until Katanya uses a Voodoo doll on the creature. It causes the Zombie to experience excruciating pain and send it falling into the water below where all assume it's been destroyed. Later, Mason, Anton Carter and Donna Garth return to Anton's home where Bruce mourns the loss of his wife, however is comforted by Donna.

Meanwhile in New Orleans, drunkard Phillip Bliss goes to the Savor-It diner to try and get a meal, when he checks his tab he sees if he can barter with the waitress with the Amulet of Damballa, however she is afraid of the object because she knows it's Voodoo origins. When two regulars enter the diner for a meal and to play the pinball machine, their regular jabs at Bliss bring attention to the Amulet. When Jennette the diner girl explains that it's the Amulet of Damballa and that it can control a zombie they all laugh it off.

Curious, Phillip uses it to "radio" a zombie to come to him, unaware that the Amulet's power is very real, and at that moment in the oceans near Haiti, the Zombie stirs to life and begins his walk to New Orleans. This story is continued later in this issue...

Appearing in "Live and Let Die"Edit

Synopsis for "Live and Let Die"Edit

A review of the James Bond film Live and Let Die.

Appearing in "The Drums of Doom"Edit

Synopsis for "The Drums of Doom"Edit

Carson, an employee for Jupiter Films arrives to meet with his boss Dan Crawford just as Voodoo expert James Samdi storms out of the office, vowing revenge for being fired from the set of a Voodoo inspired horror film. Later, Dan invites Carson to meet with him for dinner and is suddenly struck ill and three days later he dies. Going back to the set Carson is shocked to find one of the props on the set, a voodoo drum, has a canvas made out of Crawford's face.

An article about modern day witchcraft and it's origins.

Appearing in "Courtship by Voodoo"Edit

Synopsis for "Courtship by Voodoo"Edit

An ancient Egyptian pharaoh tries to use voodoo to resurrect his dead lover, however he raises a horrible zombie that kills him.

One night when a bunch of young teens deface a cemetery when they are scared off when a corpse is risen from the grave and scares them away. This corpse is named Paul, and he was once a happy man, marrying the woman of his dreams: Beth. They tell their friend George first of their impending marriage much to George's chagrin. After their wedding and some weeks of marital bliss, George kills Paul in cold blood and gets away with it.

Paul tracks George to his home and murders him, and is drawn upstairs where he finds that Beth had used witchcraft to summon Paul from beyond the grave to get her revenge for her. However, with Paul using up his usefulness and that he is mortified by being used as a tool for murder, Beth lets him die once more. Calling the police, she hopes that they will believe that Paul murdered George, however the officer arriving at the scene takes a look at the murder, decaying corpse and witchcraft perifinalia in the bedroom assumes the Beth had snapped and arrests her, suggesting to her that an insanity plea would probably work out best for her in court.

Appearing in "Four Daughters of Satan"Edit

Synopsis for "Four Daughters of Satan"Edit

1882... A group of girls attempt to kill the elderly Aunt Martha, however the old woman, a long time witch sees through their ploys to kill her and turns all their "accidents" around on them making them all die one by one until they are all dead.

Appearing in "The Law and Phillip Bliss Part 2"Edit

Synopsis for "The Law and Phillip Bliss Part 2"Edit

Continued from part one... As the Zombie travels across the ocean from Haiti to New Orleans, Phillip Bliss tells those gathered around the Savor-It Diner about how he used to be a successful scientist with a beautiful wife until his life was destroyed when his wife divorced her due to neglect and was swindled out of everything by corrupt lawyers. He has since spent his days standing in front of the court houses barking to all those who would listen about the corrupt nature of lawyers.

When the Zombie finally arrives at in New Orleans, it begins to follow it's way to Phillip Bliss, who has just been escorted away by the police when he has an ugly confrontation with his ex-wife and the lawyer that stole his wife from him. Realizing the Amulet of Damballa really does have the power to control a Zombie, Phillip orders the Zombie to smash up the court house, an order that the Zombie follows to the letter. The incident makes the front page of the newspaper.

When Phillip goes back to the Savor-It, they all ask him his opinion about what happened, Phillip plays coy, telling them that he doesn't believe in zombies because he is a scientist, and muses that sometimes people have guardian angels that look out for them.

Retrieved from "https://heykidscomics.fandom.com/wiki/Tales_of_the_Zombie_Vol_1_4?oldid=1463662"
Community content is available under CC-BY-SA unless otherwise noted.