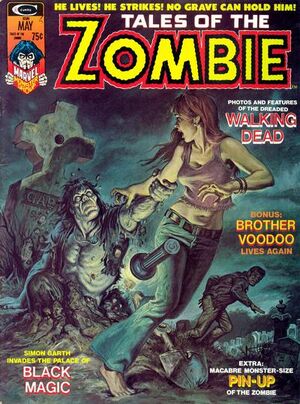 Appearing in "Palace of Black Magic"Edit

Synopsis for "Palace of Black Magic"Edit

Continued from last issue... In thanks for helping him bust up the court room and get revenge against Mr. Six for stealing his wife, Phillip Bliss makes good on his promise to bury the Zombie out of respect. He then returns to the diner to return the car he borrowed from Steve Bergen & Gene Gretch. The two boys decide to follow Phillip in secret, curious to learn where he lives. As fate would have it, men hired by Mr. Six on behalf of his master Papa Shorty have choose this moment to attack Phillip and steal the Amulet of Damballa. Although Steve and Gene come to Phillip's rescue, the men make off with the Amulet, however not before Phillip's cries for help cause the Zombie to rise from his grave and begin walking in the direction of the Amulet. The thieves bring the Amulet to the night club owned by Mr. Six and turn it over to him for their reward, which happens to be death when Mr. Six's enforcers enter the room and gun the thieves down.

As Phillip, Gene and Steve revive and go back to the diner to compare notes, the Zombie continues it's walk to the Amulet. However, it is briefly distracted when walking past a Garwood Industries building stirring the creatures buried memories of it's life as Simon Garth. The Zombie breaks into the building and sits in his old office where he is found by the buildings security guards. After a brief scuffle with them the Zombie smashes through a window and falls to the ground. He then gets up and resumes his walk to the location of the Amulet of Damballa.

At the secret hide out of Papa Shorty, a legless voodoo practitioner who uses his voodoo might to float, Mr. Six turns over the Amulet of Damballa to his master and it is revealed that Lois Bliss is a willing participant in Papa Shorty's sacrificial rituals. Mortified by everything, Mr. Six's driver Robert tries to flee and tell the authorities, however he runs into the Zombie. Papa Shorty then orders the Zombie to slay Robert, the monster having no choice because Shorty holds the Amulet can only comply, smashing the horrified drivers head against a wall. As the ceremony continues, at the Savor-It, Phillip Bliss convinces the others of all the weird goings on and Steve and Gene agree to follow him to Papa Shorty's hideout.

Meanwhile, Papa Shorty has resurrected Robert as a zombie and has the two undead creatures fight it out. It's at this moment that Steve, Gene and Phillip arrive, bursting through the door to rescue Lois. However, Papa Shorty orders the Zombie to kill Phillip, and because Papa Shorty is still holding the Amulet of Damballa he has no choice but to kill Phillip who's hopeless pleas to get the Zombie to remember his past loyalty go unheard. Roaring with laughter, Papa Shorty drops the Amulet, which proves to be a big mistake as the Zombie is now in control of itself. Free of the evil voodoo practitioners power, the Zombie then grabs him throws him at a giant stone snake, killing him on impact. As everyone flees the now burning warehouse, the Zombie walks out, leaving the Amulet behind in the blazing inferno.

Appearing in "Who Walks With a Zombie?"Edit

Synopsis for "Who Walks With a Zombie?"Edit

Getting a letter from his lover Jane Long who had been researching Voodoo in a West Indian Island, Hardin goes to see her upon her letter asking for help. There he is met by a Dr. Peoule who tells him that Jane has fallen ill and that he has come to meet Hardin in her place. Taken to Jane, he is horrified to find that she is in a strange trance and follows Peoule's orders.

Reading her notes, he learns the truth, the Peoule is not a real doctor by a practitioner of Voodoo and kills people and turns them into zombies, his most recent victim being Jane herself. When Peoule is about to shoot Hardin in cold blood, an army of the undead rises from the grave and kills Peoule.

Turning away from the horrific sight, Hardin looks back when the chaos is over to find that everyone, Jane including, have disappeared.

Appearing in "With Death Comes the Dawn"Edit

Synopsis for "With Death Comes the Dawn"Edit

Story continued from Tales of the Zombie #3....

Major Dureaux and Tracy Sanford have to battle the Dark One, the Voodoo god of evil named Bakula-Baka in order to save Tracy's brother David Sanford. Through David's body, Bakula-Baka uses his voodoo powers to create and army of were-slaves to attack people. During the confrontation Dureaux has to once more embrace his Haitian heritage, believing in Voodoo and calling for the help of the other Lao gods to help him. However, in defeating Bakula-Baka, Tracy and David are killed in battle.

Publication and fictional history of the character Brother Voodoo, and how his adventures will appear in future issues of Tales of the Zombie.

Mr. Fairbanks, a cattle farmer who has come to Haiti to make a living blames the local Latrou for poisoning his cattle in revenge for his son's hanging after the boy was caught stealing from Fairbanks. This brings both men to blows and vowing revenge on the other. Both seek out voodoo as a means of getting revenge on one another. First Ramon Latrou uses voodoo to kill Fairbanks' wife and things escalate from there. It all ends with Latrou and Fairbanks having a showdown with voodoo dolls, both men cutting off parts of their respective dolls in hopes of killing the other until they are both dead, consumed by their own desire for revenge.

Professor Cochrane has found a method that would be the source of wealth and power, and a couple of thugs want to get it so that they can exploit it to their own ends. When Cochrane refuses to divulge his secrets they try roughing him up but accidentally kill him in the process and flee the scene.

Realizing that Cochrane probably wrote his secret down, they break back into his home to try and find it, all they find is a folder labelled "Project: Afterlife" a document that holds the key to cheating death and gaining immortality. When Cochrane's wife walks in on them, they shoot her in cold blood, killing her instantly. Going to Cochrane's grave, they use the incantations in the Project: Afterlife folder to resurrect Cochrane so that they can finall learn their secrets.

The horribly decayed Cochrane mocks them, telling the two stupid thugs that Project: Afterlife was the secret that he was keeping from them, because people would pay anything to gain immortality. He then reveals to them that in order for the incantation to work, the person speaking it gives up their life force in order to resurrect the dead, and one of the thugs dies shortly after. The other one tries to shoot Cochrane to death, but to no effect and is killed by the vengeful scientist.

Returning to his home, he finds his wife dead, and Cochrane begins speaking the incantation, willing to forfeit his own immortality so that his wife can live again.

Retrieved from "https://heykidscomics.fandom.com/wiki/Tales_of_the_Zombie_Vol_1_5?oldid=1463664"
Community content is available under CC-BY-SA unless otherwise noted.