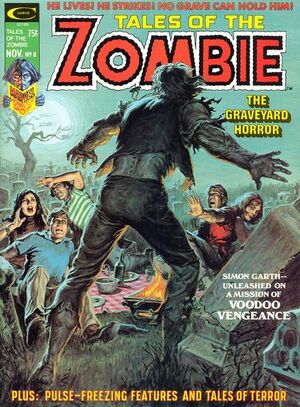 Appearing in "The Voodoo Killers"Edit

Synopsis for "The Voodoo Killers"Edit

One page story about the Cabrit Thomazos, a "red sect" of Voodoo worshipers

Appearing in "A Death Made Out of Ticky-Tacky"Edit

Synopsis for "A Death Made Out of Ticky-Tacky"Edit

Traveling through New Orleans, Layla and the Zombie stop when Layla accidentally steps on broken glass and cuts her bare feet. She is then attacked by a rat, however the Zombie is able to fight off the vermin, killing it. Deciding to have the Zombie hide someplace where it won't be seen, she goes to find Papa Doc, a resident expert in Voodoo to see if he can free Simon Garth from his curse of being a Zombie. He makes some Gris-Gris in a bottle and sends her off to use it on the Zombie, however when she arrives in the derelict building she had left him in, she is shocked to find that the Zombie has left the scene.

The Zombie has been called by the Amulet of Damballa, that is in the possession of Fred Miller, a fire fighter who found the amulet in the a burning warehouse. While Fred is throwing a swingers party, he holds the Amulet and has inadvertently summoned the Zombie. At first, everyone is horrified, and Fred tires to kill the Zombie with a gun, but it has no effect. Realizing that the Zombie is under his control, he and his fellow singers decide to amuse themselves with the zombie by ordering it to do tricks and other embarrassing acts.

When one of Miller's neighbors goes over to complain about the music, Fred has the Zombie attack him, and then acts as concerned neighbor. Later they send the Zombie to scare the elderly Louis Garrison, the owner of the Morrison Tool and Die Corporation, and the boss of one of Fred's friends. Their prank goes off well, however the sight of the Zombie scares Garrison so badly, he has a heart attack and dies. However, Fred and his cohorts shrug it off as though it were nothing.

Finally, they send the Zombie to attack a voodoo priestess, ironically it turns out to be Layla. On his way out, the Zombie spots the Gris-Gris and is about to grab for it, when Layla revives from her blow to the head and pulls off the necklace of Damballa around the Zombie's neck, giving the creature free will. Furious at being used for such horrible deeds, the Zombie then tracks down Fred Miller and his party goers and beats them all the death. When the police arrive on the scene they find the Amulet of Damballa among the dead bodies.

When young Jimmy dies after a playground accident, his family tries to use Voodoo to resurrect the boy, and are haunted by his spirit, and other dark creatures that exist in the darkness.

Appearing in "Night of the Hunted!"Edit

Synopsis for "Night of the Hunted!"Edit

Swainsville County Prison's warden takes great pleasure of letting his prisoners (mostly African American) think they can escape prison so that he and the guards can hunt them down like animals. When one such prisoner is allowed to think he's escaping (by "forgetting" to lock his leg shackles) The prisoner is shot and then hung out in the court yard as a message to the others.

In the West Indies, a letter gets to Nago-Ramal, the cousin of one of the prisoners, and he travels to America and purposely causes trouble so that he may be arrested and put in the same prison. When Nago-Ramal learns of the racist wardens hunts, he too tries to escape only to be shot and killed. However, Nago-Ramal rises from his grave as a zombie, and with an army of zombies that were former inmates of this prison, they break into the prison and hang the warden out in the court yard before vanishing into the night.

Appearing in "Tales of the Happy Humfo"Edit

Synopsis for "Tales of the Happy Humfo"Edit

Ricardo has come to Dahomey searching for hidden treasure that his family sought to claim but never returned from their expedition. He seeks the aid of an elderly voodoo master Makao, who has control over the very bees that live in the area. However, when Ricardo proves to be cruel and bigoted toward his guides and aids, Makao orders his bees to swarm Ricardo and sting him to death.

Retrieved from "https://heykidscomics.fandom.com/wiki/Tales_of_the_Zombie_Vol_1_8?oldid=1463670"
Community content is available under CC-BY-SA unless otherwise noted.