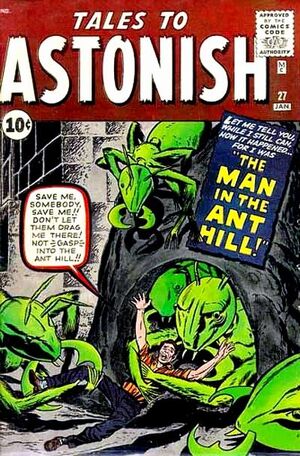 Never again did Henry Pym knowingly step upon an ant hill. For he knew that somewhere beneath him ... was one little insect—one small ant, to whom he owed his very life!

Appearing in "The Man in the Ant Hill!"Edit

Synopsis for "The Man in the Ant Hill!"Edit

Doctor Henry Pym declares success! He has successfully used his reducing serum to shrink a chair to doll size and used his enlarging serum to return it to normal size. Pym had been ridiculed months ago by his peers for his outlandish theories, but now has perfected a pair of serums capable of changing the size of any object. Confident that his serums work, Pym tests them on himself.

Placing a few drops of reducing serum on his arm, Henry Pym quickly shrinks. Now ant-sized, he realizes that he left the enlarging serum on the window sill; it might as well be on the moon. He goes out into the yard. Ants sense his presence and move toward him. Pym, still not thinking clearly, runs into an ant hill. Fleeing blindly through the tunnels, he falls into a shaft and lands in a pool of honey. Hopelessly trapped, he spots an ant crawling towards him. To Pym’s surprise, the ant pulls him free from the honey and lets him go unharmed. More ants appear. Pym notices a matchstick set in the ground and, hoping to create a diversion, throws a pebble at it. His aim is true, and the match lights.

Pym fashions a lasso and climbs up to a ledge. There another ant grabs him in its mandibles. Pym uses judo to flip the ant over the ledge and scrambles upward. Once out of the ant hill, with the colony in hot pursuit, he sees the friendly ant who saved him earlier. He points upward to tell the ant where he needs to go. The ant climbs the wall with Pym aboard. He wades into the test tube with the serum and immediately returns to normal. Convinced that his invention is dangerous, he dumps his serums down the drain.

Appearing in "Mirror, Mirror, on the Wall..."Edit

Synopsis for "Mirror, Mirror, on the Wall..."Edit

Bill Carter enters an antique shop looking for a birthday gift for his wife, Anne, and finds an antique mirror. Although the antiques dealer warn's him the mirror belonged to a sorcerer and is thought to be enchanted, Bill gets it for his wife, thinking the strange story will enhance the mirror's appeal. Anne puts the mirror in the bedroom so she can dress in front of it.

Over the next days, Anne spends increasing amounts of time in front of the mirror, becoming less friendly as she does. Eventually, she tries to release the sorcerer trapped in the mirror. She tricks Bill into the next room and locks him in, then begins the ritual. Bill pounds on the wall, asking to be released, and the vibrations knock the mirror from the wall, breaking it and releasing Anne from it's spell.

Appearing in "The Talking Horse"Edit


Synopsis for "The Talking Horse"Edit

A warrior race dispatches one of their conquerors to the planet whereupon they have detected intelligent life, but after the ship has dropped him off and departed not to return for several years hence, he can find no sign of civilization. The weeks turn to months then months to years and eventually the warrior loses the will to live and expires on what appears to him to be a dead world. It turns out the inhabitants were disguised as rocks.