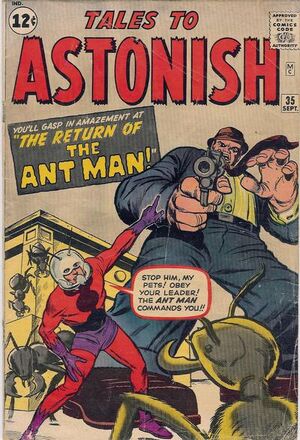 Appearing in "Return of the Ant-Man"Edit

Synopsis for "Return of the Ant-Man"Edit

Synopsis for "The Doorway to Nowhere!"Edit

Synopsis for "The Thing from Outer Space!"Edit

Sometime in the future, a planet is surrounded by a strange mist that warns travelers of a quarantine. In the year 2006, Colonel John Rogers arrives back on Earth to an adoring crowd, carrying a sample of vegetation from Nythanos. The plant telepathically tells the crown that it is really Colonel Rogers, and the plant's life-essence has taken possession of his body. He now has the plant's powers, but they only work in Nythanos' atmosphere. To test the claim, the atmosphere of Nythanos is duplicated, and John Rogers is able to retake control of his body. The plant explains that it had John Rogers' memories, and didn't realize it wasn't really him. It warns that there are many other plants on Nythanos who will use such an ability instinctively. The planet is quarantined, and the plant returned home.

Retrieved from "https://heykidscomics.fandom.com/wiki/Tales_to_Astonish_Vol_1_35?oldid=1629837"
Community content is available under CC-BY-SA unless otherwise noted.