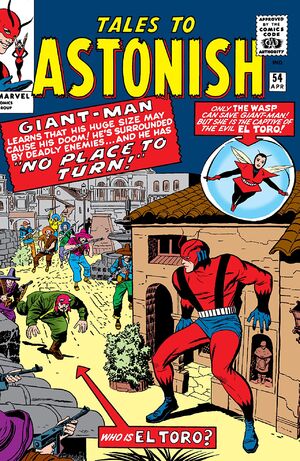 Appearing in "No Place To Hide!"Edit

Synopsis for "No Place To Hide!"Edit

Synopsis for "There Were Five Frightened Men"Edit

Getting a phone call from Henry Pym to go out on a date, the Wasp has to decline because she is stuck at home babysitting the son of her sick friend. Ending her phone call, young Tommy asks the Wasp to tell him a bed time story.

She tells him a story about a ruler of a distant planet known as Shann, the people of Shann's planet are content and Shann is worried that this will mean that they will take him for granted and not be awed by his presence. He soon comes up with a solution to become exulted by his people again: invade another planet.

Soon, Shann realizes his own vanity has cost him the respect of his people. Finishing her story, the Wasp asks if Tommy like the story, however the boy is more interested in knowing why the Wasp only has her wings when she's wasp-sized only.

Retrieved from "https://heykidscomics.fandom.com/wiki/Tales_to_Astonish_Vol_1_54?oldid=1630705"
Community content is available under CC-BY-SA unless otherwise noted.