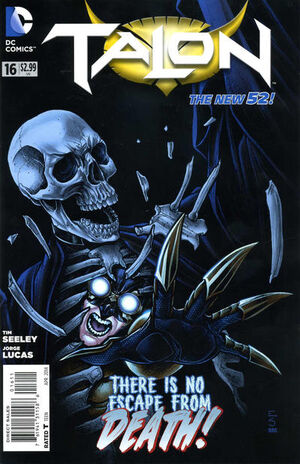 Though Calvin Rose had escaped death for years, whether by his own father or the Court of Owls, when he was betrayed by Sebastian Clark, his luck ran out - until he was resurrected by the Court. Since then, though, Death has been following his every move.

in Gotham City, Casey Washington and Anya Volkova meet on the roof of the abandoned Gotham branch of LexCorp Security, hoping to stay off the radars of their recent business partner in Wayne Enterprises. Ever since Calvin was recruited into Batman Incorporated, it's been hard to keep things from the capes - and it would be pretty embarrassing for Calvin, as an escape artist, to be saved by someone else. From their vantage point, they watch the coffin, dangling from a crane, in which Calvin is chained and gagged. Within, he recalls the day he had broken the chains his father had used to lock his cage as a boy, as he picks the locks binding him now. Soon, the chain that was holding his coffin to the crane snaps, and he crashes into the water below with it. Worriedly, Casey sends Edgar and Joey to rescue him, while Calvin realizes with horror that he failed.

As they ride back to the Securitus Island, Joey pokes fun at the fact that watching Calvin's workouts is always more fun when he fails. Calving takes it with aplomb, but chooses to take a shower by himself upon his return. He is surprised when he is joined in the shower by Anya. She comments that she can see his inability to feel. His senses have been dulled by death, and it has affected his ability to manipulate locks and picks. Calvin admits that he is troubled by more than that. When he had first escaped his father's cage, he had done it through desperation. The fear of death and pain has since been removed from him, and now it seems like there isn't any motivation to escape, except for the worry that he might be trapped forever in darkness, unable to die. Anya suggests that if he wants, she can take him to the Lazarus Pits prized by the League of Assassins, and perhaps their fluids will rid him of this undeath. The only catch is that Casey cannot come with them. Casey sees the world differently than they do. Being trapped in a box for her would seem a wonderful dream.

Elsewhere, Lord Death Man is being studied under captivity, and an irregularity in his heartbeat alerts his doctors to the likelihood that they will be able to extract more Shelley Formula from him, as they have been exsanguinating their prisoner for some time in the hope of doing just that. Without their noticing, though, Lord Death Man's eyes begin to glow with life. Three days later, Lord Death Man is free, and he kills as many of his captors as possible.

Over the Arabian Sea, Anya leads Calvin to a location over which the entrance to a Lazarus Pit has been buried beneath the waters. They had heard tell of a lab in Karachi where the liquid that fills the Lazarus Pits is supposed to have been created. Every six months, scientists from around the world are flown in and sealed in the facility with only a subterranean entrance tunnel for field agents accessible from beneath one hundred and twenty feet of shark infested waters. As Calvin swims for the hatch, he is unaware that Lord Death Man is waiting on its other side. Even deeper in the facility, though, resides Doctor Darrk, who has unexpectedly woken from his induced slumber, and isn't happy about it.

Meanwhile, in the facility's subterranean tunnels, Calvin reunites with Anya, who is quickly alerted by the sound of Lord Death Man's singing.

Retrieved from "https://heykidscomics.fandom.com/wiki/Talon_Vol_1_16?oldid=1473336"
Community content is available under CC-BY-SA unless otherwise noted.