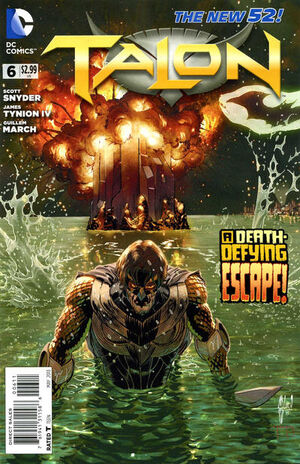 Damn Sebastian, I knew you owned the building, but you've been holding out on us...

In Sebastian Clark's underground compound, the old man is upset to discover that the new CEO of Securitus is John Wycliffe - the current Grandmaster of the Court of Owls. This confuses Casey Washington, who has seen no indication that Wycliffe is anything other than a stooge. Regardless, their friend Calvin Rose is trapped on Securitus Island, and there is nothing they can do to help him.

In the bowels of the island's turbine run-off tunnels, Calvin has been caught in a trap by three Talons, who apparently comprise three generations of the O'Malley family - though the elder two are annoyed with the youngest - Nathaniel, who has, as yet, refused to procreate. Trapped in a steel cage, Calvin loops a heavy line around the necks of two of the talons through the bars of the cage. Then, leaping up onto the cord, and choking the Talons, he explains that by removing his weight from the pressure plate trigger of the trap, he can cause it to reset. As the trap resets, the cage rises up to the ceiling, dragging the two Talons up along with it by their necks.

While they are distracted, Calvin makes a run for it down the tunnels, just as the turbines begin to function again - which means that these tunnels will soon flood again. Refusing to let their quarry escape, Nathaniel ignores his father and grandfather's warnings and chases after Calvin.

While Sebastian is in the training room, apparently venting some anger, Casey takes the opportunity to hack into his Court of Owls database, and search for John Wycliffe. Despite Sebastian's claims to the contrary, the database shows no results for him.

Seeking an escape from the flooding tunnels, Calvin climes up a sewer outlet, but Nathaniel explains that it is a false escape, with electrified rungs. He will have to go through him to escape. Turning on Nathaniel O'Malley, Calvin asks why the Talon continues to seek his ancestors' approval when clearly it is only he who is smart enough not to bring another child into the life of a Talon of the Court; to birth a child into slavery. The Court is evil, Calvin warns, and Nathaniel could stand up for himself by helping him stop the Court.

Meanwhile, in uptown Gotham City, Felix Harmon has discovered the Batman - who himself has been called to investigate the murders that Felix only just committed. Desperately, the Court warns Felix not to engage with Batman, and to focus only on Calvin Rose. Angrily, the Court warns him that they placed cryobombs into his skull, should he become disobedient. Annoyed, he acquiesces, leaving Batman to be confused by the evidence of the killer's size at the scene. In an alley nearby, Felix recalls that the cryobombs were supposed to have been placed behind his eyes, and thrusts his sharp claws into his own eye sockets to remove them.

Sure that Nathaniel has died, Brandon and James O'Malley discuss whether or not they should let Nathaniel take responsibility for his own failure, or blame it on Calvin Rose in order to prevent the young man from being interred with the rest of the Court's unworthy. They are interrupted by Nathaniel, who has, in fact, brought Calvin Rose back with him.

Calvin is introduced to John Wycliffe, who admits that he was intrigued by Calvin's exploits since he was brought to the Court. He confesses that he is not the man who recruited Calvin. Even so, Calvin's regrettable efforts to undermine the Court have resulted in the Grandmaster of the Court becoming CEO of Securitus, so they can be forgiven. Wycliffe claims that he only just came into the position of Grandmaster, which he assumed Calvin already knew, given how he has been working for the Court for the last few months.

Calvin is confused as Wycliffe explains that Calvin has been used by Sebastian Clark to reclaim the resources that were taken from him by the Court. It was Sebastian whose leadership as Grandmaster of the Court had resulted in failure against the threat of the Batman, and who had poisoned eleven of their number before making an escape. He then recruited Calvin to take back the assets that were taken from him when the remainder of the Court chose Wycliffe as his replacement - to some success. That recruitment is all the more ironic, Wycliffe says, because Sebastian Clark was the very man who had recruited him into the Court from Haly's Circus long ago.

Meanwhile, Casey sneaks into Sebastian's penthouse above the compound, and discovers that he is truly a member of the Court of Owls, and a liar.

Retrieved from "https://heykidscomics.fandom.com/wiki/Talon_Vol_1_6?oldid=1473326"
Community content is available under CC-BY-SA unless otherwise noted.