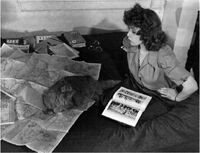 She was born in the borough of Brooklyn.

Tarpé Mills (1915–88) was the pseudonym of comic book creator June Mills, one of the first major female comics artists. She is best known for her action comic strip, Miss Fury, the first female action hero created by a woman.[1]

Born June Tarpé Mills, she signed her work by her middle name "Tarpé" to conceal her gender. She received her education at the Pratt Institute in New York.

The Miss Fury comic strip began April 6, 1941. A character based loosely on Mills' own appearance, the artwork was created in a glamorous style with considerable attention placed on the heroine's outfits. As the strip became more popular, it eventually became public knowledge its creator was a woman. During World War II, Mills' cat Perri-Purr was introduced in the strip, and during World War II Perri-Purr became the unofficial mascot for the Allied troops.[2]

Miss Fury ran until 1952, when Tarpé Mills mostly retired from the comics industry.[1] She briefly returned in 1971 with Our Love Story for Marvel Comics.

Retrieved from "https://heykidscomics.fandom.com/wiki/Tarpe_Mills?oldid=1568972"
Community content is available under CC-BY-SA unless otherwise noted.