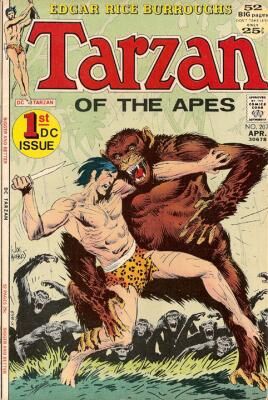 Appearing in "Origin of the Ape Man (Part I)"Edit

Synopsis for "Origin of the Ape Man (Part I)"Edit

While searching for her father in the jungles of Africa, a woman listens to the tale about a wild ape man, from her guide.

FLASHBACK: Lord John Clayton, 4th Earl of Greystoke and Lady Alice leave Dover, England in 1888 to sail on a matter of business to Freeport, in North Africa. But their ship is over-run by pirates and they are taken prisoner. A mutiny erupts aboard the ship, and the Claytons are abandoned on the shores of the Congo.

Lord Clayton tries to eke out a life for his pregnant wife and himself. He builds a tree-house for them far away from the jungle animals. Lady Alice eventually gives birth to her son, John. Before the year is out, Alice contracts a rare jungle virus, becomes delusional and eventually passes away.

A gorilla named Kerchak observes these invaders to his jungle and investigates the Clayton cabin. He bursts into the cabin and kills Lord Greystoke. Another gorilla named Kala, having lost her own child, decides to adopt the human infant.

Kala raises baby John Clayton and he grows up to become the hairless lord of the jungle known as Tarzan.

In the year that Tarzan is first born, Lord and Lady Greystoke celebrate his first Christmas – and their last. Lord Greystoke carves a small wooden toy for his child and presents it to him on Christmas morning. That evening, he hunts for a wild boar and prepares it for dinner. Outside, Kerchak calmly watches the family biding his time, waiting for the day when he can drive them out of the jungle.

It is the year 1866. John Carter is a former confederate soldier from Virginia who now seeks his fortune with his partner, Powell, in Arizona. But a tribe of savage Indians attacks them and Powell is killed. John pulls Powell's body into a cave for shelter. Suddenly, a strange energy washes over John and his life-essence is pulled out of his body.

He awakens to find himself on the planet Mars. Exploring a nearby community, he discovers a nursery with dozens of small eggs and little green bug-eyed aliens. He then finds a troupe of strange Martian soldiers heading his way. These Martians are at least 10-feet tall and have two sets of arms. He tries to communicate with them, and the Martians gesture for him to mount one of their demon-steeds. They all head to a waiting city as John wonders if he'll ever be able to return to his own world.