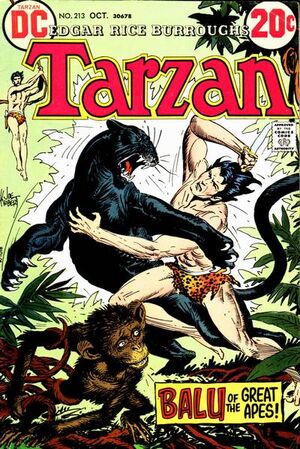 I have never traveled so far from my tribe D'Arnot. Is it much further to Baltimore?

After Jane Porter, her father and William Clayton, become marooned on Africa's coast, Tarzan rescues them from the perils of the jungle and saves Jane from a great ape. Later, the French navy come to the island and try to rescue the Porter party, but the French Lieutenant is caught by the Gomangani Tribe. However, Tarzan quickly rescues him. Thankful for the rescue, the Lieutenant becomes Tarzan's good friend and teaches him French. He also translates Tarzan's family journals that were found in his parent's cabin. The Porter's leave the island unannounced, and ultimately, Tarzan travels to America to find Jane, who he has fallen in love with. Tarzan (now clothed and able to speak) finally meets Jane at her home in Baltimore, and they renew their acquaintance. He learns the bitter news that she has become engaged to William Clayton. Meanwhile, clues from his parent's journals have enabled the Lieutenant to prove Tarzan's true identity. His English name is "John Clayton, Lord Greystoke," William's cousin. He sends a cablegram to America with the news. Tarzan reads D'Arnot's message, but does not share it with Jane. Instead of claiming his inheritance, he chooses to conceal and renounce his heritage for the sake of Jane's happiness.

Retrieved from "https://heykidscomics.fandom.com/wiki/Tarzan_Vol_1_210?oldid=1466704"
Community content is available under CC-BY-SA unless otherwise noted.