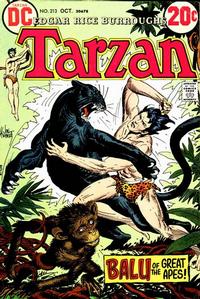 I drop out of one war... and fall into the middle of another! I wonder where in the universe I am?

Appearing in "Balu of the Great Apes"Edit

Synopsis for "Balu of the Great Apes"Edit

Tarzan begins to understand the rewards of a grateful tribe when he saves a baby ape from two hungry panthers. From this day forth he shall be known as — "King of the Apes."

Appearing in "Beyond the Farthest Star"Edit

Synopsis for "Beyond the Farthest Star"Edit

During WWII, an American fighter pilot somehow ends up on the planet Poloda, after being shot down behind enemy lines (Germany). After parachuting down from his fired upon plane, he finds himself on a mysterious new world that is also at war. He's quickly enlisted to join the fight of the liberty-loving "Unisans" (underground people) against the fascist-like "Kapars" (the surface dwellers).

Retrieved from "https://heykidscomics.fandom.com/wiki/Tarzan_Vol_1_213?oldid=1466710"
Community content is available under CC-BY-SA unless otherwise noted.