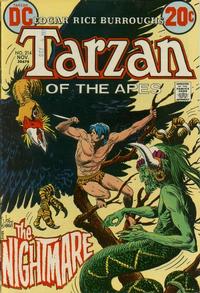 After eating some spoiled meat he salvaged from the Gomangani's village, Tarzan begins to hallucinate and believes that several strange creatures are attacking him. However, when a giant white ape approaches him, he quickly learns that this beast is quite real and not a figment of his imagination.

Appearing in "The Naming of Tangor"Edit

Synopsis for "The Naming of Tangor"Edit

Tangor lands his air-ship near a village in ruins. The peaceful men from the war-torn village take him in and explain how the surface dwellers (the Kaparians) continue to attack them. During this lecture, the Kaparians fly over and begin firing, killing the old man who was speaking with Tangor. Quickly, Tangor boards his air-ship and an aerial dog fight ensues. After shooting down the enemies, Tangor lands his ship and helps the survivors. While burying the old man who was shot down earlier, Tangor says his farewell to the others and swears allegiance to their peaceful ways.

Retrieved from "https://heykidscomics.fandom.com/wiki/Tarzan_Vol_1_214?oldid=1466712"
Community content is available under CC-BY-SA unless otherwise noted.