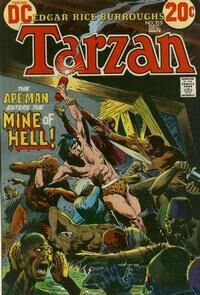 I am Tarzan, King of the Apes! And in my domain, no living thing may be treated as you treat these men! Release them!

Tarzan is enslaved as a mine worker in the jungles of Africa. As he and the other prisoners work below, the mine boss sets off some dynamite in order to kill them. After the explosion, Tarzan begins to find another exit and leads the workers through the darkness to freedom.

Tangor's air-ship is fired upon and the crippled vehicle plunges into the ocean. While trying to abort his craft, he becomes swept in by the undertow. Several fish-men come to his rescue and take him to the "Life-Place." The creatures then operate on the unconscious Tangor, giving him temporary gills, so he may breath underwater. When Tangor wakes up, the medical procedure is explained to him.

Meanwhile, a giant octopus has caused a sea-quake. Tangor grabs a spear and confronts the aquatic menace by stabbing it's eye and beak. After the confrontation, the fish-people invite him to stay since he is so brave. Tangor ponders over this...

Retrieved from "https://heykidscomics.fandom.com/wiki/Tarzan_Vol_1_215?oldid=1466714"
Community content is available under CC-BY-SA unless otherwise noted.