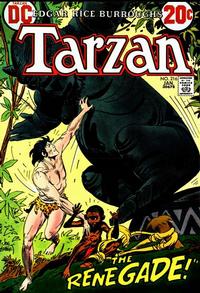 No jungle beast would slay as wantonly as you! Your friends have paid their penalty... you two will pay... now!

Five thieves disguise themselves like African natives and steal dynamite and supplies from a local mission compound. They then make a journey through the jungles to discover treasures in a long lost city. Tarzan hears the muffled explosions the men are causing and heads to "the old city" to confront them. The men enter the tombs, while Tarzan follows them through the subterranean maze. When they discover the room of a dead king, they're overjoyed by the gold and jewelry which fills it. Suddenly a strange low moan is heard in the chamber. Believing a curse is being unleashed, one of the men panics and runs away, however, the gang leader shoots him down, to prevent him from blabbing to the cops if they nabbed him. The other four men continue to gather the valuables, but a shiny red ruby begins to glow within a statue. Two of the men notice this and fight each other as they scramble for it. One is shot by a rifle by the other. The "winner" then climbs the statue and removes the gem, but the stone figure's arms moves, crushing its victim. Two men are left. Tarzan leaps forward and throws a spear towards them and is able to skewer them both, killing them. He then takes the red ruby to the village that was pillaged earlier, hoping the gem can be sold for monies for a new hospital.

Tangor is able to pilot a Mermen's spaceship and leave the planet Poloda. However, once in orbit, he is quickly fired upon by the surface people. His ship is hit and flies out of control until he crashes the rocket onto an unnamed planet.

Retrieved from "https://heykidscomics.fandom.com/wiki/Tarzan_Vol_1_216?oldid=1466716"
Community content is available under CC-BY-SA unless otherwise noted.