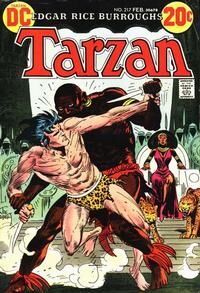 If we do not learn to live together in peace... then the lowly mosquito will survive us all!

Appearing in "The Black Queen"Edit

Synopsis for "The Black Queen"Edit

A dying man, who has washed up from the river, relates his story to Tarzan about his people being slaves "beyond the black hills. After his confession, he collapses and dies. Tarzan goes in search of the dead man's village, and finds the tyrant known as the Black Queen.

Appearing in "The Forest of Peril"Edit

Synopsis for "The Forest of Peril"Edit

Tangor continues his adventures on different alien worlds. After leaving the planet Poloda, he crashes his rocket onto an unnamed planet. He's promptly attacked by a nightmarish beast that chases him up a tree. Below, a strange little monkey alien diverts the beast's attention, and Tangor is able to impale his foe with a sharp branch. He and the monkey creature become friends and walk towards the mountains, where it seems several ape men are waiting for them.

Retrieved from "https://heykidscomics.fandom.com/wiki/Tarzan_Vol_1_217?oldid=1466718"
Community content is available under CC-BY-SA unless otherwise noted.