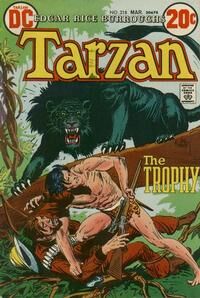 I could kill you now... where you stand! But, that would not be true justice! First, you must learn what it means to be the hunted... rather than the hunter! Go into the jungle! Hide... if you can! For I will come after you! ...Run... RUN!

A bored millionaire goes on the hunt for rare, exotic animals, but soon Tarzan avenges the cruel killings and sets a trap for the hunter.

Appearing in "Princess of Doom"Edit

Synopsis for "Princess of Doom"Edit

Tangor continues his adventures on different alien worlds. Leaving the planet Poloda, he crashes his rocket onto an unnamed planet. He befriends a strange little alien monkey who leads him to some mountains. On the plateau, several Ape-Men are waiting. Later, he is introduced to the monkey's family and sets up camp in their village. During the night, the monkey companion wakes Tagnor and takes him to the swamp. There, the two witness a beautiful woman rising from the waters. She wants the three of them to be comrades. Suddenly, several Ape-Men approach them, trying to take the woman as a prisoner. Sensing their intentions, Tangor defends her by fighting them off. The creatures run away into the forest. The three then hold hands and walk towards the sunrise.

Retrieved from "https://heykidscomics.fandom.com/wiki/Tarzan_Vol_1_218?oldid=1466720"
Community content is available under CC-BY-SA unless otherwise noted.