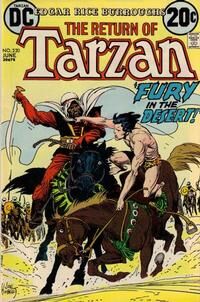 If Rokoff and I meet again... one of us will pay a high price!

Appearing in "Fury in the Desert"Edit

Synopsis for "Fury in the Desert"Edit

As a token of friendship, Tarzan is offered a government position in Algeria by Count de Coude. The Count wants him to find a French officer who is suspected of selling information to other governments. Once docked off the coast, Tarzan looks for the Frenchman inside a musty cafe, where he is promptly assaulted by the locals. He makes his escape, with the help a female dancer. Later at his hotel, Tarzan receives a letter from his friend Captain Paul D'Arnot. The letter informs him that Jane Porter is to be married soon. It also warns him how Count de Coude's brother-in-law, Nikolas Rockoff, has left Paris, in hopes of finding and killing him. The next morning, Tarzan is called to duty to ride deep into the desert due to bandits looting a village. Riding out, and alone, Tarzan is ambushed by several men. As Tarzan is being hog-tied, his enemy, Nikolas Rockoff, steps from the shadows taunting death to his captured foe. During the night, the female dancer comes to his rescue by slicing through his tent and unbinding him. Together they flee to her father's village. Now out of danger, Tarzan wonders what is the connection between Nikolas Rockoff and the Lt. who sent him out into the desert to be ambushed.

Retrieved from "https://heykidscomics.fandom.com/wiki/Tarzan_Vol_1_220?oldid=1466724"
Community content is available under CC-BY-SA unless otherwise noted.