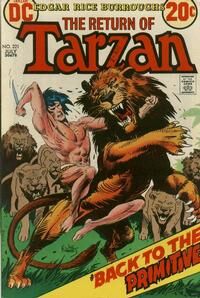 Appearing in "Return To the Primitive"Edit

Synopsis for "Return To the Primitive"Edit

Tarzan is ordered to Cape Town by his superior Count de Coude. On the ship he meets a female friend of Jane Porter. He also confronts master criminal Nikolas Rokoff, who throws him overboard. Tarzan swims clear of the ships propellers and heads east. Hours later, he finds an abandoned floating raft and drifts throughout the night. When he awakes, he finds himself washed up on the jungle's shore. Beyond, he spots the cabin his father built, where he was born. He is home. He searches for the Gomangani Tribe to find food and arms. During his journey, he notices a warrior is about to be attacked by a lion. Leaping into action, Tarzan rescues the tribesman and kills the lion. Grateful, the warrior leads him to his village for a feast of honor. The next day, the tribe heads out to kill a rogue elephant. Unfortunately, the chief is stomped on by the beast and dies. Tarzan spears the elephant, killing it. The tribe begin to hail their new chief -- Tarzan.

Meanwhile, Jane's lady friend continues her cruise to Cape Town. As luck would have it, she bumps into Jane, Prof. Porter and William Clayton. The friend has gained a traveling companion herself, the sinister Nikolas Rokoff, Tarzan's sworn enemy.

They all depart on William Greystokes' yacht, en route to England. Jane and William plan to marry once there. However, the yacht explodes suddenly, and they abandon ship. They row east to land, to the wilderness where Jane first met her true love, Tarzan. To be continued.