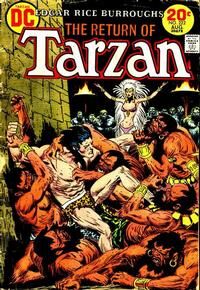 They have captured a white girl! They must have taken her for a sacrifice! It... It's Jane!

Appearing in "The City of Gold"Edit

Synopsis for "The City of Gold"Edit

Tarzan asks the Waziri Tribe to take him to the "Forbidden City." Once there, he enters the gates of the ancient Temple of Opar. Immediately, he is captured by Beast-Men and they prepare him for a sacrifice. Suddenly, La, the High Priestess, commands the ritual to stop. She argues with one of the Beast-Men, wanting Tarzan freed. One of the prehistoric men becomes angry. He goes berserk and slaughters his fellow tribesmen. Tarzan frees himself from his binds and attacks the Beast-Man, snapping his neck. The High Priestess leads Tarzan into a chamber for safety. He removes a stone from the wall and escapes through a hidden tunnel. He is able to get beyond the walls of the city and warn the Waziri Tribe that they are in danger.

Meanwhile, Jane, her fiancée, William Clayton, and the sinister Nikolas Rokoff, Tarzan's sworn enemy, have been at sea for days in a tiny rowboat.

The castaways find land and dock. Two days later in the early morning, Jane is kidnapped by several Beast-Men. They drag her to the "Forbidden City" and prepare her for a sacrifice. Tarzan hears about the "white girl's" capture from the Great Apes Tribe. He goes back through the underground tunnel, to try and rescue her.

Retrieved from "https://heykidscomics.fandom.com/wiki/Tarzan_Vol_1_222?oldid=1466728"
Community content is available under CC-BY-SA unless otherwise noted.