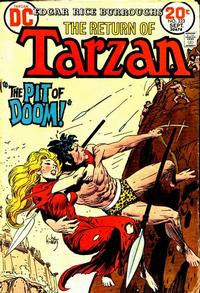 I am sorry, But... this woman and I were fated for each other... from the beginning of time!

Appearing in "The Pit of Doom"Edit

Synopsis for "The Pit of Doom"Edit

Jane, her fiancée, William Clayton, and the sinister Nikolas Rokoff, Tarzan's sworn enemy, were castaways at sea for several days.

They finally found land and docked their tiny rowboat. Two days later in the early morning, Jane was kidnapped by several Beast-Men from Opar, the Forbidden City. They dragged her to their temple and prepared her for a sacrifice. Tarzan heard about the "white girl's" capture from the Great Apes Tribe and went through a secret underground tunnel to try and rescue her.

As he is witnessing the High Priestess about to plunge a dagger into Jane's heart, he quickly swoops down seizing a flaming brazier and fighting off the Beast-Men. After unbinding Jane from the alter, they run off and crawl through the secret tunnel to safety. When they reach the surface, the Beast-Men are still in pursuit and are throwing arrows and spears at them as they climb down the cliff wall.

Finally safe, they swing through the jungle to meet the other castaways at their beach campsite. Moments later they arrive. Tarzan notices the weak and dying William. He goes to his side and hears his cousin's confession of knowing who Tarzan really is, as he had read a telegram long ago about his true identity.

The party buries William next to the graves of his aunt and uncle, by the weather-beaten cabin where Tarzan was born. During this solemn moment, Nikolas Rokoff swings a shovel down on Tarzan, trying to kill him. Tarzan picks himself up from the ground and is extremely angry at his foe. He speaks of the traitor's crimes, how he dislikes how he blackmailed his friends, and then left his cousin to die. He then leaps at his enemy and promptly breaks his arm. Ready for the kill, he swings him into the air, when Captain Paul D'Arnot suddenly rows to shore and approaches the confrontation.

Tarzan hands the man over to the French authorities and everyone pushes off, towards a waiting cruiser. Tarzan is left onshore, wondering if he will ever return to the decaying city of Opar.

Retrieved from "https://heykidscomics.fandom.com/wiki/Tarzan_Vol_1_223?oldid=1466730"
Community content is available under CC-BY-SA unless otherwise noted.