Dead Reckoning is a Team 7 storyline written by Chuck Dixon with illustrations by Jason Johnson. It was published by WildStorm through Image Comics. The series follows Dixon's earlier works [[Team 7: Gone Animal|Gone 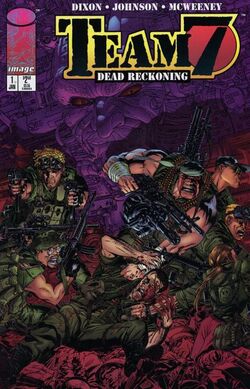 We were all good little soldiers, Craven. But a man draws the line when it comes to his family.

Dead Reckoning is a Team 7 storyline written by Chuck Dixon with illustrations by Jason Johnson. It was published by WildStorm through Image Comics. The series follows Dixon's earlier works Gone Animal and Objective: Hell.

In the 1980's during the Cold War, Team 7 is still doing missions for I.O.. They break into a Leningrad facility and kidnap one of Russia's top researchers on psychic powers. During this mission, Lynch kills their most powerful test subject and loses his eye in the fight. When they return to McLean, Cole Cash is outraged to learn they are working for Miles Craven again. Cash, Callahan, Chang, and Fairchild leave the team and return to civilian life. Cash realizes he is starting to lose his powers, and fashions a shoddy red mask for himself. Gabriel Newman has the comatose Dane locked up with their other failed genetic experiments in Level Nine. Callahan announces that his wife Becky Rainmaker is now pregnant.[1] Cash goes back into intelligence, and is captured by the Russians. They interrogate him, and plan to execute him when they realize his powers are gone. Lynch tracks his location through telepathy, and they rescue him while destroying the enemy base. Callahan is told his wife and child died in labor, but they are actually taken for government experiments. Becky knocks a doctor out and escapes with her daughter. Lynch becomes suicidal, which ruins his marriage at home. Craven makes Deathblow loyal by helping him assassinate his father's murderer. The Level Nine inmates manipulate Dane's power so they can escape.[2] Craven makes Slayton a StormWatch commander after he stops a plane hijacking. Becky appeals to Cray and Lynch for her daughter Sarah's protection. The group's powers begin fluctuating, and they worry about the rest of their children. When Level Nine finally breaks out, Team 7 is the only group that can stop them. They are unable to withstand Dane's increased powers, and he nearly kills them. Cray shows up with X'ing X'iang and she easily defeats Level Nine.[3] X'iang uses telepathy to learn that Craven is trying to steal their children. They are now surrounded by Craven's forces, but X'iang throws up a smokescreen and they escape. Cray stays behind as X'iang is his only family, and he chokes out Craven until Slayton stops him. The rest of Team 7 rush to protect their children. Callahan murders a SWAT team who take his family hostage. Cash uploads a virus created by Cyberjack to erase them from the government data banks. Slayton tries to bring in Cash, but Newman knocks out Slayton so Cash can escape. In the aftermath, Slayton infiltrates Craven's estate as Backlash and threatens him. Craven swears he will get his hands on the children of Team 7. It is also shown that Newman and X'iang are kept imprisoned until Craven has a use for them.[4]

Retrieved from "https://heykidscomics.fandom.com/wiki/Team_7:_Dead_Reckoning?oldid=1577412"
Community content is available under CC-BY-SA unless otherwise noted.