Gone Animal is the first Team 7 storyline, published by WildStorm through Image Comics. It was published in the Team 7 mini-series by Chuck Dixon and Aron Wiesenfeld. The story is set in Wildstorm Universe continuity, although it was part of the lar 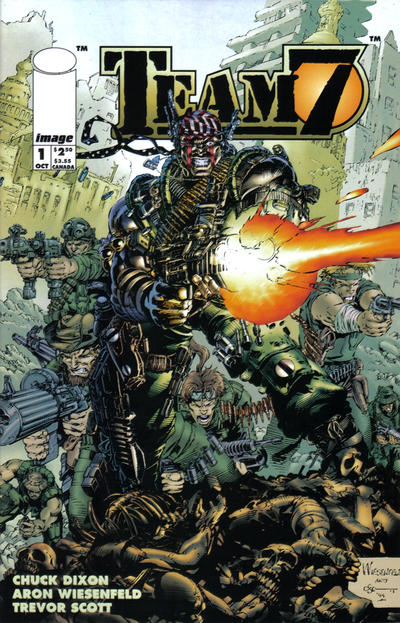 I figure the seven of us are a world power all by ourselves.

Gone Animal is the first Team 7 storyline, published by WildStorm through Image Comics. It was published in the Team 7 mini-series by Chuck Dixon and Aron Wiesenfeld. The story is set in Wildstorm Universe continuity, although it was part of the larger Image Universe until Shattered Image. This series is followed by a sequel later that year titled Objective: Hell.

During the 1970's, Team 7 is the government's top black ops unit. Their roster includes Alex "Slaphammer" Fairchild, Andrew Johnson, Berckmann, Cole "Deadeye" Cash, Jackson "Arclight" Dane, John "Topkick" Lynch, Marc "Backlash" Slayton, Michael "Deathblow" Cray, Rich "Boloround" McNamara, Stephen "Wraparound" Callahan, and Stewart "Bulleteer" Chang. Miles Craven, director of I.O., sends them on dangerous missions in the Middle East. Craven decides to use them as part of an experiment to develop super-soldiers. He sends them on a mission to Iran, and has them bombed with the radioactive Gen-Factor.[1] They're extracted to a medical facility, where they're overseen by Alicia Turner. Berckmann dies and McNamara kills himself. The team members develop psychic powers, except for Cray. Craven's right-hand telepath Gabriel Newman keeps them from learning the truth about their origins. During their first mission back in the field, Johnson uses telepathy to make an African dictator smile while killing himself. Cash executes Johnson, declaring that the power has turned him into a monster.[2] Lynch is furious and nearly kills Cash, but keeps his secret from Craven. Cash grows angrier at the team abusing their powers, and beats up Fairchild for trying to coerce women into sex. Their actions get the Soviet Union's attention, and the telepath Rostov swears to destroy them. Cray is dismissed from the team for not having powers. Craven decides on a final test, and sends them to an abandoned monastery. Cash finally loses his temper and fights Lynch, knocking him out after their powers destroy the building. It's revealed that Craven plans to nuke Team 7, to fully test their abilities.[3] Cray is imprisoned on a ship, but he takes the captain hostage to warn Team 7. They realize there's no way to escape in time, and they have to combine their psychic powers. Holding hands in a circle, they survive the blast and walk away. In the aftermath, Lynch decides to remain with the government. Cray is kept in prison for mutiny, and the rest of the team goes into hiding in Nicaragua.[4]

Retrieved from "https://heykidscomics.fandom.com/wiki/Team_7:_Gone_Animal?oldid=1577474"
Community content is available under CC-BY-SA unless otherwise noted.