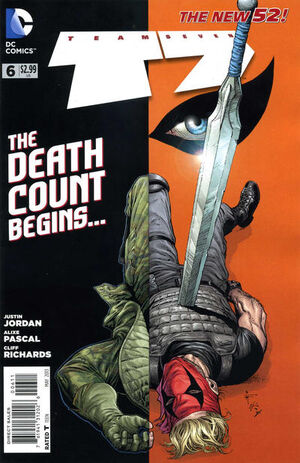 Well, today might be the day you see more of your teammates die - We got hostiles incoming!

Appearing in "Mission 2.2: Birth of a Superman"Edit

Synopsis for "Mission 2.2: Birth of a Superman"Edit

After hearing of the attack on the Advanced Prosthetic Research Centre, Team 7 is called off of leave to investigate. Alex Fairchild in particular has an interest in the case, because his daughter Caitlin works there.

Thinking that their entry will be unimpeded, Summer Ramos brings them in close, only to have a horrifying mechanical monster send a buzz-saw through her gut. While the others contend with several other such drones, Summer does her best to guide the airlift to the facility, bringing it crashing down just outside the building. Before Waller can do anything for her, Summer dies of her injuries - the first time Waller has lost anyone in the field. Slade Wilson reminds her that there may be more deaths on the way, because there are more of these creatures coming.

The facility is crawling with hundreds of human-cybernetic hybrids whose prosthetic limbs have taken over their bodies. Disturbingly, they are all chanting the words "Caitlin, help me?", making the team all the more eager to get inside and make sure Caitlin is alive.

Inside, Slade spots a figure standing in a doorway, surrounded by corpses and dying cybernetic hybrids, and he warns the person not to move. Fairchild recognizes her as his daughter, and rushes forward, only to find that she too has been overtaken by cybernetic enhancements, as she thrusts her clawed fist through his chest. Enraged at seeing the only person on the team he would call friend killed, Slade gives chase, regardless of Waller's warnings not to. Cole Cash is sent to follow him.

Eventually, Slade catches up to her, and she keeps asking "Daddy?", over and over. Angrily, he responds that she is not really Caitlin - at least, not anymore - and shoots her through the head. After regrouping, Dinah Lance suggests that killing these creatures was too easy. Surely something that could create all of these hybrids would be better able to protect itself. Waller confirms this, sure that Caitlin was meant to be a distraction away from finding something.

That something steps out from behind them, introducing itself as the former Dr. Henshaw. He has subverted the Spartan's programming, but he doesn't have long to retain control over his body. He explains that this carnage was not the Spartan Subject's primary directive. Instead, Spartan was meant to target James Bronson by Gamorra - but it got tired of waiting.

Unfortunately, Bronson is still on leave, visiting family, and that visit is soon interrupted by the appearance of the Spartan Subject himself. Bronson tries to stop it from initiating its core transfer, but the entire building explodes in their skirmish, and only Bronson emerges, having merged with the Spartan Subject.

Retrieved from "https://heykidscomics.fandom.com/wiki/Team_7_Vol_2_6?oldid=1474004"
Community content is available under CC-BY-SA unless otherwise noted.