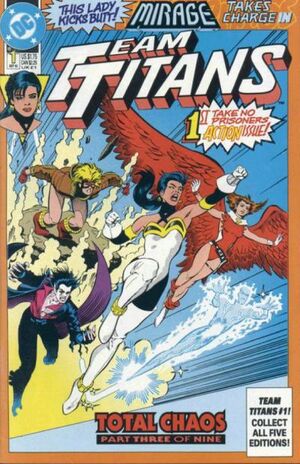 In the alternate future timeline of 1998, Mirage is a young Metahuman shape-shifter. She often helps out members of the underground resistance opposed to Lord Chaos. A squadron of Chaos' Force Elite soldiers raid a safe-house where Mirage is staying and she is abducted. Because of her metahuman abilities, she is inducted into their ranks rather than killed. She endures a brutal brainwashing process that turns her into a loyal, obedient soldier. During a training exercise, she is instructed to kill a close friend in combat.

On July 18th, 1999, Mirage is ordered to use her talents to infiltrate another underground resistance cell. She masquerades as an old woman named Jessie and finds a colony of free citizens living beneath the streets of Manhattan. One of the members of this colony is the red-winged Metahuman Carrie Levine. Seeing the plight of these people, and their dedication to freedom, breaks through Mirage's mental programming. She decides to betray her Force Elite masters and helps the underground dwellers evade execution.

Retrieved from "https://heykidscomics.fandom.com/wiki/Team_Titans_Vol_1_1:_Mirage?oldid=1462921"
Community content is available under CC-BY-SA unless otherwise noted.