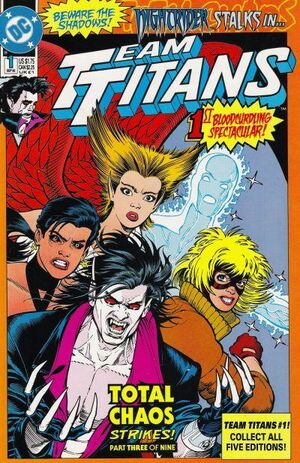 In Transylvania, a military commander named Stalg abducts a fourteen-year-old boy and brings him back to the castle of the legendary vampire Dracula. One of Stalg's greener stormtroopers, Charles Watkins, takes pity on the boy and tries to comfort him during his imprisonment. Commander Stalg, dressed in the trappings of Dracula himself, recovers the remains of Dracula, and in a special laboratory, fuses the vampire's DNA with that of the young boy. The boy emerges from the experiment as a Dagon - a nightrider.

Unfortunately, for Commander Stalg, tonight is the night of the Walpurgis Eclipse - a time when all evil is fated to be purged from the land. Mystical forces combine with the souls of Transylvanian villagers to create a grotesque creature that razes Castle Dracula. The creature attacks Stalg's troops and the commander is killed. As the monster bears down on Corporal Charles Watkins, Dagon intervenes on his behalf. He convinces the monster that Watkins showed him compassion whereas the others didn't, and for that, he should be spared. The entity concedes and as the evening ends, the Transylvanian townsfolk return to normal.

Retrieved from "https://heykidscomics.fandom.com/wiki/Team_Titans_Vol_1_1:_Nightrider?oldid=1462923"
Community content is available under CC-BY-SA unless otherwise noted.