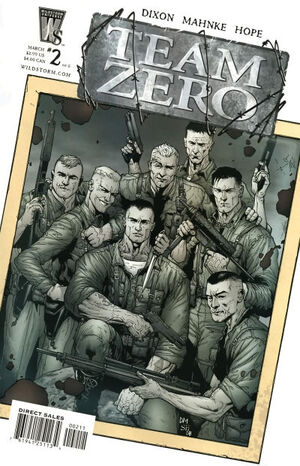 Deathblow chose the members for his team for the operation in Peenemünde:

Corporal Willis "Billy" S. Miller, codename: Grifter, special in requisitions and coming from the 5307th Composite Unit in the South-East Asian Theater. And also a expert in card playing.

Sergeant Andrzej "Andy" Taszycki, codename: Bullet, special in close quarter combat and from the US Army. Is notorious for his psychotic behavior in cruelly killing prisoners and potential in even killing his fellow soldiers.

Deathblow lecture the team and their classified assignment. After the briefing, Bullet shows his callous concern over Deadeye's background, which Deadeye in turn easily fight him before Claymore subdues a agitated Bullet. Telling him that even though he fought the Japaneses, he respects Deadeye for being an American and fighting for his country. Deathblow's superiors observes this, which one of them concerns that their violent reputation would jeopardize the entire operation. But the other is assure of the team Deathblow pick out.

Retrieved from "https://heykidscomics.fandom.com/wiki/Team_Zero_Vol_1_2?oldid=1474845"
Community content is available under CC-BY-SA unless otherwise noted.