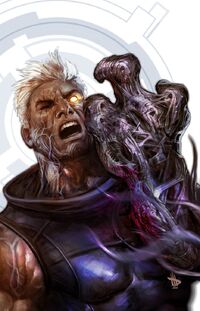 Origin
Is a deadly virus which converts living material into technology resulting the host's death.
Owners

The Techno-Organic Virus converts living material into technology, ultimately consuming its host. The converted life continues to "live" and function, but is driven by the desire to spread to other life forms. The virus has no known antidote, although it can be held in check by telekinesis and other powers. The Techno-Organic Virus also has the ability to re-animate dead life.

The exact origin of the Techno-Organic virus is unclear.

Apocalypse was introduced to the virus from a young Nathan Summers, calling himself the Traveler. In a battle between Traveler and Apocalypse, they were both cut and Ozymandias, Apocalypse's servant, had Apocalypse's body returned to the newly found Celestial Ship, that Apocalypse, at that time, could not understand or communicate with. With Traveler's blood mixed with the Techno-Organic Virus and his own, Apocalypse was healed in a chamber of the ship and, infected with the virus, could then understand the ship. Years later, Apocalypse used the virus to infect Nathan Christopher Charles Summers as an infant, leading to his transport to the future and his growing up to be Cable. It was possible that Apocalypse used this knowledge of past/future events to infect infant Nathan Summers so that he himself would become Apocalypse in the past.

Apocalypse also used the virus to infect Warren Worthington III, who had been beaten by the Marauders to the point that his wings needed amputation and almost killed in a plane explosion. Born with a set of bird-like wings originally, Warren's new wings could fly higher, faster, and were razor sharp, with feathers that were thrown as blades with a neurotoxin. Warren's Techno-Organic wings eventually molted off and his feathered wings were underneath.

The Phalanx also share many similarities with the Techno-Virus, as seen in its members Warlock and Magus, who carry the Transmode with him.

The virus was later used again, by Stryfe, a clone of Cable created after he arrived in the future that was raised by Apocalypse, in an attempt to kill Professor Charles Xavier. For reasons completely his own, Apocalypse cured Professor X of the virus.

Use by Bastion and Selene

After resurrecting and manipulating the body of Magus, Bastion used the virus to resurrect members of his newly created Human Council. At this time, Warren's feathered wings were ripped-off, by a controlled Wolfsbane, and, upon investigating, it was revealed that he still carried the techno-organic virus and his feathered wings were simply Techno-Organic appearing feathers. Warren has since been able to switch back and forth between the two. Matthew Risman used the feathered wings to create the Choir, a group of Purifiers endowed with Techno-Organic wings that were opposed to Bastion's Human Council.[1]

Being a member of Bastion's Human Council, Eli Bard stole a sample of the virus to use for Selene to resurrect all of the mutants slaughtered on Genosha and around the world (Those killed in Neverland, the Hellions, etc) and absorb all of their lifeforce to empower her to ascend to a divinity. However, Douglas Ramsey was able to corrupt the T-O virus code to freed himself from Selene's control.

During the Second Coming Bastion used the T-O virus to track down Cable, in order to kill the Mutant Messiah. Later, Cable freed the virus to transform him totally in a metal-skinned mutant, to allow him opening a portal from Earth-811 to Earth-616 and saving X-Force from an inescapable killing-sentinels and surviving destiny. He then exploded from the effort, leaving his originally infected arm on the floor, and was sent to Earth-4935 by an unknown phenomenon. Bastion in turn quickly used the techno-organic virus to resurrect Graydon Creed and Stephen Lang into sentinels.

Despite having survived, Cable was still dying from the virus. He then decided to take down the Avengers before his death. Failing in his mission and injured, he was cured by Hope Summers who used the Phoenix Force to annihilate the virus, on the advice of Blaquesmith. This led to many complications for Cable, who used to employ his powers to repress the virus.

The Virus reappeared, tearing civilians, leading to the reformation of a Cable-led X-Force.

Retrieved from "https://heykidscomics.fandom.com/wiki/Techno-Organic_Virus?oldid=523250"
Community content is available under CC-BY-SA unless otherwise noted.