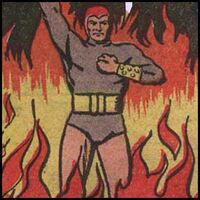 Ted Tyler and Engine Company No. 5 was called to put out the fires of a chemical plant. When Ted climbed in the window of the burning building, he was knocked out by the notorious pyromaniac known as The Bug. The Bug left him for dead, and the fire continued to roar and the walls begin to collapse, spilling chemicals.

Miraculously, Ted survived the fire and it was later revealed that with the touch of his fingers he could set things aflame.