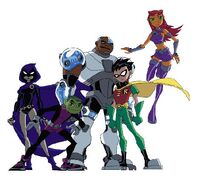 Teen Titans was a half-hour animated television airing on the Cartoon Network from August of 2003 until January of 2006. The series was loosely based on the original Marv Wolfman & George Pérez run on New Teen Titans, but aimed at a younger target audience. The series blended traditional American animation with Eastern influences making it a unique and often underappreciated addition to the Warner Bros. DC Heroes line-up. The Teen Titans series was inclusive to its own continuity, and did not seem to explicitly share the same reality as other programs such as, Justice League Unlimited, Batman: The Animated Series, Superman: The Animated Series and Static Shock. In September 2006, Cartoon Network aired the first Teen Titans animated movie entitled, Teen Titans: Trouble in Tokyo.

The theme song for the Teen Titans animated series was written and composed by Japanese performers Ami Onuki and Yumi Yoshimura. Onuki and Yoshimura are famous within Japanese anime circles and the track "Teen Titans Go!" was released on their 2003 album NICE. The song has been released both in its original Japanese as well as an English translation, both of which have been featured on alternating episodes of the Teen Titans. It is interesting to note that episodes in which the theme is sung in Japanese are intended to be comedic and funny, while the ones sung in English are intended to have a more serious tone.