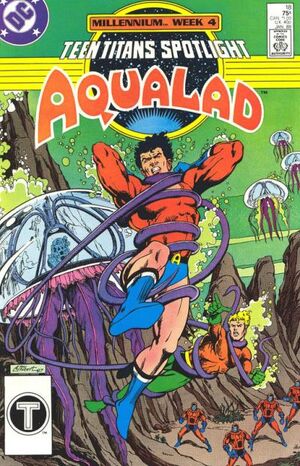 In the ocean depths, Aquaman watches his protege Aqualad attempt to exercise his telepathic power to command sea life, which has failed him since his psychic struggle with Mento (seen in issue #10). An explosion alerts the duo to nearby danger, and they discover several gigantic jellyfish-like vehicles piloted by Manhunters. Aquaman explains how he learned of the Manhunters' current menace at the recent meeting of Earth's super-heroes at the Green Lantern Citadel, but before he and Aqualad can act, they are shocked unconscious by the jellyfishes' stingers. Recovering, the two heroes discover that the Manhunters are engaged in a salvage operation, attempting to excavate a saucer-shaped craft from the ocean floor. Aquaman and Aqualad, aided by their fish allies, attack the androids, and manage to beat them back temporarily, but when Aquaman, realizing that the Manhunters' "submarines" are actually living creatures, attempts to control them telepathically, he is shocked senseless. Alone and powerless against the remaining Manhunters, Aqualad has an inspiration and allows one of the jellyfish-creatures to shock him repeatedly, which has the desired effect of activating his mental powers. He now discovers, however, that his power only works when he requests, not commands, the sea creatures' aid. He summons whales and sharks to push the Manhunter forces back, then communicates with the jellyfish beings themselves, and turns them against the Manhunters who have enslaved them. The jellyfish then free the ship the Manhunters had sought, but before the defeated androids can be imprisoned, they self-destruct. The recovered Aquaman congratulates his young counterpart, as they prepare to deliver the ship to their fellow super-heroes for study.

Retrieved from "https://heykidscomics.fandom.com/wiki/Teen_Titans_Spotlight_Vol_1_18?oldid=1462976"
Community content is available under CC-BY-SA unless otherwise noted.