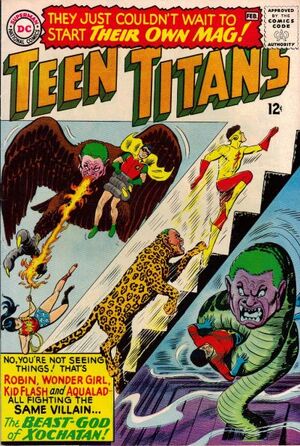 The Teen Titans are summoned to Washington D.C., there they are asked to go to the South American nation of Xochatan where a Peace Corps unit had been sent to build a small dam and a school when they ran into trouble necessitating the aid of the Teen Titans. The Peace Corps director asks the Titans if they would join the Peace Corps and help out. In spite of the fact that they are concerned that their lack of experience makes them worthy to be members of the organization, the Titans agree to join and a swearing in ceremony is rushed and gains media attention. When the Titans' mentors learn the news they are all proud of their sidekicks on their distinction.

Flown into Xochatan, the Titans arrive just in time to find the town being terrorized by a giant conquistador statue. During the fight, the giant statue mysteriously vanishes into the side of a mountain. Upon closer inspection the Titans cannot figure how the statue managed to disappear. Joining the Peace Corps unit, they are taken to see the dam that is being built. There one of the bulldozers comes to life and tries to crush them, however Wonder Girl stops it from harming anyone. Deciding to check out the mountain again, they send Kid Flash to vibrate into the mountain side to see if he can learn anything about their mystery saboteur. He is chased out by the statue which tries to rampage the site again, however the Titans manage to defeat it by making it trip and fall into a hole they dug for it, ending it's menace.

With the dam completed, it causes waters to raise near an ancient pyramid causes the ancient beast-gods to come to life and terrorize the Peace Corps. The Teen Titans manage to fight off and defeat the beasts, and stop their master a man who was furious over the construction of the dam as it would flood his temple. Capturing the man, they learned that they were summoned when their carvings were submerged in water. With the threat over, the Titans agree never to scoff at superstition ever again.

Retrieved from "https://heykidscomics.fandom.com/wiki/Teen_Titans_Vol_1_1?oldid=1482452"
Community content is available under CC-BY-SA unless otherwise noted.