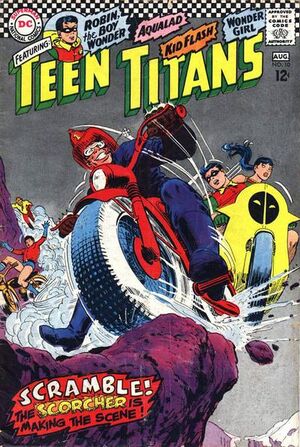 Appearing in "Scramble at Wildcat"Edit

Synopsis for "Scramble at Wildcat"Edit

With his brand new Batbike, Robin pays a visit to his fellow Teen Titans in the Titan Lair, where he informs his teammates that they have been invited to attend the first annual Sand Scrambler event organized by the Wheeler-Dealers a teenage biker club. The other Titans agree to go and leave in their Titan helicopter to the town of Wildcat where the event is taking place. However when the Titans arrive in Wildcat they find the town strangely deserted. Landing in the center of town they are met by an old man named Al Farnum, the grandfather of Flip Farnum, the boy who organized the event. Farnum tells the Titans that the Wheeler-Dealers will be there soon. Al explains to the Titans that Wildcat is only inhabited by himself and Flip, but believes the place will boom again once oil has been found in the area.

Just then Flip and the rest of the Wheeler-Dealers arrive and Robin and the rest of the cyclists get ready to begin their motorcycle race. However, before they can start, Scorcher and his biker gang the Bike Buzzards arrive and Scorcher boasts that he will win the race by any means possible. While Robin participates in the race, Kid Flash, Wonder Girl, and Aqua Lad are suspicious of Scorcher and the Buzzards and figure they are up to no good and follow along the race to make sure they don't cause any trouble.

As expected, the Scorcher uses unsportsmanlike methods to get ahead of the race, with only Robin trailing behind him. The Scorcher then tries any means to kill the Boy Wonder, however Robin manages to narrowly escape any attempt to cause him to have an accident with a combination of his skill as a cyclist and the Bat-Bike's built in devices. However Robin's luck runs out when the Scorcher causes an avalanche that seemingly buries Robin alive. Later when Wonder Girl spots Scorcher and the other Buzzards using dirty means to get ahead, and that Flip is the only sportsman rider ahead on the course, she uses her lasso to stop them up. However when it's pointed out that Robin hasn't been seen recently, the Scorcher tricks Wonder Girl into believing that Robin drove into an abandoned mine, and when her guard is down Scorcher knocks her down into the bottom of the mine shaft, knocking her out. The rest of the Buzzards then manage to defeat Kid Flash tricking him into running into a wall by creating an illusion, and wrecking Aqualad's jeep and beating him until he is unconscious.

With the Teen Titans out of the way, Scorcher and the Bike Buzzards go on a crime spree in nearby towns, looting local shops before finally tying up Flips grandfather and trying to force him to give over his oiling devices over to them so that they can profit on any oil that may be found in Wildcat. While Scorcher and the Buzzards have Al tied up, Flip manages to revive all the Titans and the group attacks Scorcher just as Al's oil Derick beings spouting oil. With defeat a possibility the Scorcher decides to light the oil on fire, however this proves to work against him as he neglects to notice that a circle of the crude oil has formed around him trapping him in a ring of file. In the end, the Scorcher is saved by the Titans when Kid Flash uses his super speed to put out the flames.

With Wildcat's financial future guaranteed and Scorcher and his gang put to justice, the Titans consider their mission accomplished.

Retrieved from "https://heykidscomics.fandom.com/wiki/Teen_Titans_Vol_1_10?oldid=1482450"
Community content is available under CC-BY-SA unless otherwise noted.