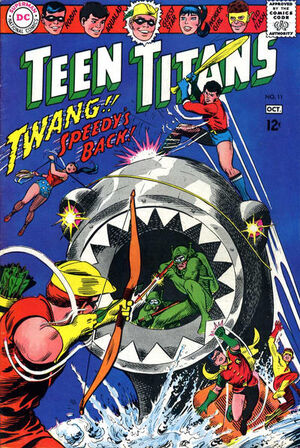 Checking their bulletin board at the Titan Lair, the Teen Titans are drawn to the attention of a classified about a young bowman looking for summer work. They are shocked to find that it's Speedy, who has returned to the Titan's lair to work with the group once more in the summer. This comes at an opportune time as they had just gotten a letter from boy genius Willie Gregson who is working as a lab assistant for Dr. Simon Finley. Not knowing what the problem is the Titans go to the boys location which turns out to be a summer resort.

In order to learn what's going on, the Titans land their helicopter and change into their civilian guises and travel by raft. Along the water they run into a fisherman who warns them that there is a giant lamprey monster reportedly in the lake. When the Titans drift away, the fisherman (really a crook) calls his subordinates who send the lamprey (not really a monster but a machine) to attack the Teen Titans. With the help of Aqualad they manage to escape the attack, however their raft is ruined in the attack. Examining it later, they realize the fire breathed by the lamprey was done using chemistry and not by a natural creature.

The Titans spy a man blackmailing Willie into threatening to expose his father Joe as a criminal if the lad doesn't steal Project X for the crooks. Blackballed into this situation, Willie returns to Finley's lab where he secretly steals for the folder with the details of Project X and smuggle them out of Finley's lab completely unaware that he Titans are watching the whole thing. The Titans confront the boy and agree to help him out, they decide to try and capture the crooks by giving them what they want: The Project X folder, however they take one of the pages as insurance that the crooks don't get the full plans.

Willie puts the folder in a buoy and when the crook in the fishing boat tries to reel it in, the Teen Titans spring into action to stop him. Speedy uses drill arrows to punch holes in the crooks boat causing it to sink. However as the Titans are trying to recover the buoy they are attacked by the mechanical lamprey monster once more. This time they are prepared, and manage to not only get the buoy into their possession, but Speedy manages to destroy the "monster" with a grenade arrow.

With the buoy returned to land, Willie gets to it first as the Titans and the crooks all race to try to claim possession of it. Willie is caught by Dr. Finley who accuses him of stealing the plans just as the crooks arrive to reclaim them. Willie then risks his life to prevent the crooks from shooting Finley with a harpoon gun. The Titans arrive and rough up the crooks, however one of them manages to get away with the plans in another boat. Speedy uses another exploding arrow to destroy the boat, and Wonder Girl recovers the crook and the plans and return them to Dr. Finlay. With everything explained afterwards, Finley, Willie and the Titans celebrate their victory.

Retrieved from "https://heykidscomics.fandom.com/wiki/Teen_Titans_Vol_1_11?oldid=1463003"
Community content is available under CC-BY-SA unless otherwise noted.