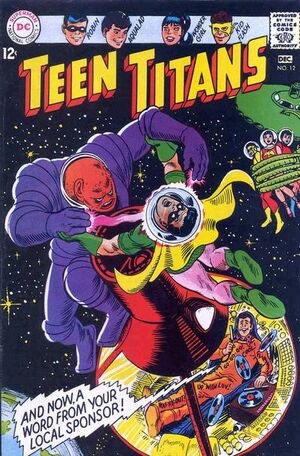 Appearing in "Large Trouble in Space-Ville!"Edit

Synopsis for "Large Trouble in Space-Ville!"Edit

Famous radio personality D.J. Deejay has become the first to have a radio broadcast from outer space, orbiting around the Earth in a space capsule fitted with a radio broadcast equipment. The broadcast is heard and enjoyed all around the world especially by the Teen Titans who are listening to the radio show while going through a training session. As the broadcast continues, Wonder Girl notices that there is something wrong and calls the other Titans in to listen. Robin finds that Deejay has been sending out hidden messages in his patter alerting anyone sharp enough to listen that he's in trouble.

Based on what Robin picks up from the broadcast he takes the Titans off to South Dakota where they spot a crook with a special ray gun that causes Mount Rushmore to raise up into the sky. The Titans try to stop the crook from sending the monument into space, and get caught up in it's beam as well. Kid Flash tries to run down the beams path to knock out the crook. Fearing capture the criminal shuts the device off and flees the scene leaving the Titans to make sure Mount Rushmore is restored to it's original shape. After they realize that Deejay has been tipping them off to various crimes in progress and decide to monitor the radio some more to learn about any more crimes taking place.

The Titans are unaware of the fact that Deejay has troubles of his own in the form of an alien that has hitched a ride on his space capsule and is forcing him to send coded messages to his operatives on Earth to steal various artifacts. Back on Earth the Titans are led to Egypt where they spot another crook trying to steal the Sphinx and try to stop him. He uses his special ray gun to split the Titans: Aqualad to a nearby river infested with crocodiles, Wonder Girl into the hands of a man who wishes to make her part of his harem, Kid Flash in the middle of the desert and Robin at the mercy of vultures. Each of the Titans overcomes their situations and knock out the crook before he can escape in the Titan's own helicopter.

Learning about the aliens plot, the Titans take a rocket into space where they battle the alien and try to take back the Sphinx, During the fight the aliens ship manages to capture Aqualad, Wonder Girl and Kid Flash, however Robin uses the Sphinx itself as a weapon to knock the alien out. With the alien defeated, the Titans bring Deejay and the Sphinx back to Earth. Back on Earth the Titans thank D.J. Deejay for his assistance in stopping the alien.

Retrieved from "https://heykidscomics.fandom.com/wiki/Teen_Titans_Vol_1_12?oldid=1463005"
Community content is available under CC-BY-SA unless otherwise noted.