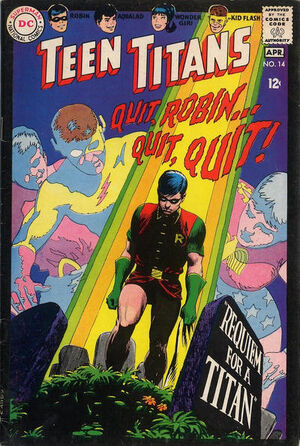 Appearing in "Requiem for a Titan!"Edit

Synopsis for "Requiem for a Titan!"Edit

Out in a cemetery, a villain known as the Gargoyle surrounded by tomb stones adorning the names of the Teen Titans demands the lone Robin remove his uniform. When the Boy Wonder refuses to take off his mask, the Gargoyle brings about the spectres of the other Titans who call Robin a coward. Accepting his fate, Robin removes his mask and is blasted by the Gargoyle's ring and is seemingly killed. How did this come to be? The answer is in the not too distant past...

As the Titans have a meeting in their Titan lair a nearby television studio is stormed by the Gargoyle, who has the station give him time on the special emergency channel for calling the Teen Titans. The Gargoyle tells the world that he is wearing his disguise to conceal his identity and explains that he was unjustly imprisoned by the Teen Titans and demands that they come to the studio to answer for his accusations, stating that one of them is responsible for his incorrect incarceration. As the Titans rush to the studio, everyone believes that Robin -- as their leader -- is likely the one who could be blame for any unjust arrests.

When the Teen Titans arrive, they are instantly attacked by the Gargoyle who accuses Robin of framing him. Before the other Titans can react they are blasted by the Gargoyle's ring and are seemingly destroyed. As Robin snaps out of his shock and doubt of his ability he tries to stop the Gargoyle but is constantly attacked by the taunts and spirit forms of his teammates, who blame him for screwing up. During the fight Robin's costume is wrecked and he is beaten by a combination of the Gargoyle and spirit forms of the Titans commanded from Limbo by Robin's foe. The battle ends with a fire starting in the studio and the Gargoyle leaving the Boy Wonder to die in the blaze. Robin manages to get free and escape the inferno just as fire fighters arrive on the scene.

Returning to the Titan Lair, Robin is greeted by the Gargoyle and the ghosts of his comrades and is forced to abandon the base. Robin decides to crusade against crime on his own, however when news of the Titan's seeming demise hits the newspapers a crime wave erupts. His resources stretched thin, Robin is soon over worked and easily defeated and is mocked by the public. Realizing that he is a failure, Robin would go to his fated meeting with the Gargoyle.

When Robin was shunted to Limbo, the Gargoyle assumed that the Boy Wonder's mind would be flooded with evil thoughts and turn bad like his comrades, however Robin anticipated this and conditioned his mind to resist the transformation. Trapped in Limbo with his evil comrades, Robin battles them creating enough vibrational energy to bring the Gargoyle into that dimension. There Robin reveals he is not under the Gargoyle's control and using a combination of his acrobatic skill and utility belt manages to get to the Gargoyle close enough for the Boy Wonder to destroy the creatures ring.

This causes a giant vortex that sends the Gargoyle spiraling off into Limbo, and returns the Teen Titans to Earth, who all are restored back to their normal personalities and have no memory of their time in Limbo, save for Robin who promises to tell the group that he'll explain the whole thing to them.

Retrieved from "https://heykidscomics.fandom.com/wiki/Teen_Titans_Vol_1_14?oldid=1463009"
Community content is available under CC-BY-SA unless otherwise noted.