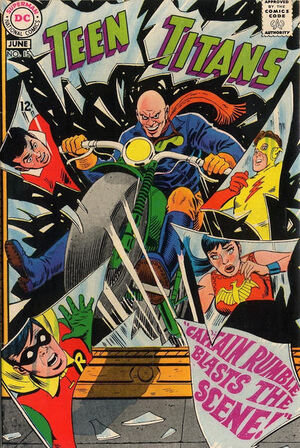 The Teen Titans (followed by "The Poet" a Hippie singer) are on the search for missing teen Ken Matthews. Their search brings them to a section of town that is full of hippies. They meet a man named Eddie, who helps runaway teens who "don't make it" as a hippie find their ways back home. As the Titans continue their search, Ken is in a nearby mechanics shop where he has taken up delivery jobs for a shady character.

Sent to put a package down a manhole the boy is spotted and chased by the police. Seeing the chase, the Titans help stop Ken and learn that he was about to stash stolen goods. While the Titans are dealing with the fact that Ken doesn't want to reveal who his employers are, the scene is suddenly disturbed by the arrival of a biker gang led by Captain Rumble, who have come up to rough up some hippies. When the Teen Titans break up the fight, Rumble demands the police officer arrest the Titans because his "rights" were violated, his demands are dismissed and the officer tells the gang to get lost. The Titans notice that during the altercation, Ken managed to slip away. In order to find him, the Titans decide to disguise themselves as hippies in order to search for him incognito.

Meanwhile, Ken has returned to his apartment and his girl Karin who learns of his troubles and suggests that he try to call his parents, an idea that Ken refuses. Meanwhile, his boss a man named Trucker is getting pressure from his employer Big Arnie to deliver the package that Ken bungled, and tells his boys to find Ken and bring him back to their hideout. When Trucker and his goons arrive at Ken and Karin's place, they try to flee. During their escape they are also spotted by the disguised Titans who try to help out, but the vengeful Captain Rumble appears and makes the chase more complicated. The Titans put Captain Rumble down hard, and Kid Flash smashes up Trucker's operation, however Ken and Karin manage to slip away again. Realizing that the Teen Titans are also after him, Ken is even more determined to get away, while Captain Rumble has regrouped with his men and are heading back to get revenge against the hippies.

The Titans (losing their hippie disguises) and the hippies work together to put a stop to Captain Rumble and his bikers, while Ken realizes that he's in too deep and gets the Titans to help him capture Trucker and Big Arnie. With his help in catching the crooks, Ken is allowed to have a suspended sentence and the Titans arrange for his parents to the grateful boy up and take him back home.

Retrieved from "https://heykidscomics.fandom.com/wiki/Teen_Titans_Vol_1_15?oldid=1463011"
Community content is available under CC-BY-SA unless otherwise noted.