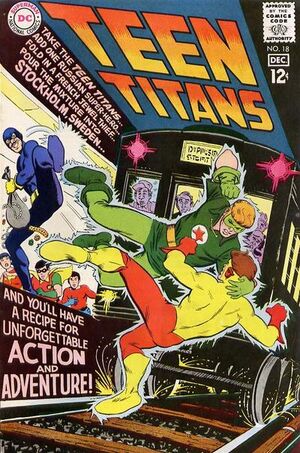 Appearing in "Eye of the Beholder!"Edit

Synopsis for "Eye of the Beholder!"Edit

The Teen Titans are asked to come to Stockholm by Interpol. There they are asked to help capture jewel thief Andre Le Blanc with the help of Starfire, a teenage superhero from Russia. Upon meeting the young hero, it turns out he's less than enthusiastic about working with American super-heroes and only is there out of duty for his country. The Titans are also not that impressed with the accommodations with Kid Flash verbally telling Starfire that they can work well without him. Starfire arrogantly explains his origins:

He explains that years ago, his archaeologist father had taken him on a mission to investigate an apparent meteor that crash landed in Russia. However, it turned out that "meteor" was really an alien space ship, snooping around the young Starfire accidentally activated one of the ships devices, which bombarded him with strange alien energy which gave him his super-powers. Since then he had been working a government super-agent for the KGB.

That night, the Titans and Starfire watch over a jewel mart in Stockholm, where they catch Andre Le Blanc using high tech gadgets to try and rob the place. However, the lack of teamwork between the Teen Titans and Starfire allow Le Blanc to escape which leads to an argument between Kid Flash and Starfire and almost come to blows until Robin breaks them up. Elsewhere at Le Blanc's secret hideout the crook completes his plans for his next robbery: The crown jewels.

The next day, Le Blanc sends a message to the Titans and Starfire through Interpol, boasting about his next jewel heist and goads the young heroes into trying to stop him. When Le Blanc tries to rob the location of the royal jewels, the Titans and Starfire are there waiting for him. Aqualad impulsively goes after the jewel thief and is trapped in the ventilation system with his strength rapidly weakening and no water around to be had.

The other Titans are soon also defeated, Kid Flash by a force field, Robin bested in hand to hand combat, and Wonder Girl tripped up by her own lasso. When Le Blanc steals the royal crown, the only one standing in his way is Starfire who chases the crook into a subway tunnel. During the fight, Starfire is knocked down onto the tracks. Having freed themselves the Titans arrive in the subway tunnel where they stop Le Blanc from detonating a grenade and Kid Flash saves Starfire from an oncoming subway train.

When Le Blanc tries to ditch the crown by tossing it into a sewage drain, Aqualad is able to recover it and Robin beats the jewel thief into submission. After the battle, the Titans and Starfire gain new appreciation for each other and they part company as friends.

Retrieved from "https://heykidscomics.fandom.com/wiki/Teen_Titans_Vol_1_18?oldid=1482465"
Community content is available under CC-BY-SA unless otherwise noted.