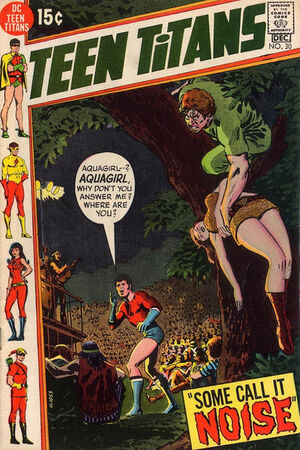 The Titans are assigned by Mr. Jupiter to procure a charity donation from businessman Hargood P. Tout, but become sidetracked preventing a robbery. When one of the thieves, Kevin Murphy, is hospitalized after being accidentally hit by a car while making his getaway, the Titans help police protect him from assassins. These killers prove to have been sent by Hargood Tout, who is revealed as Murphy's former criminal partner. After Tout had used his ill-gotten gains to become a legitimate businessman, he had tried to have Murphy done away with to prevent him from revealing Tout's shady past, but Murphy had faked his own death in order to foil his would-be assassins. Now revealed as being still alive, Murphy is again a target, until the Titans stop Tout's hirelings and have Tout jailed.

Appearing in "Some Call it Noise"Edit

Synopsis for "Some Call it Noise"Edit

Aqualad and Aquagirl come ashore to enjoy part of an outdoor rock concert in a small coastal town. Meanwhile, a hospital patient becomes a berserk marauder clue to an injection of an experimental synthetic hormone, escapes the hospital, and menaces the audience at the nearby concert. Aqualad overcomes him, but not before Aquagirl is injured and wanders inland in a daze. Aqualad barely manages to find her and return both of them to the sea before they die, having been on land beyond their one-hour time limit.

Retrieved from "https://heykidscomics.fandom.com/wiki/Teen_Titans_Vol_1_30?oldid=1463042"
Community content is available under CC-BY-SA unless otherwise noted.