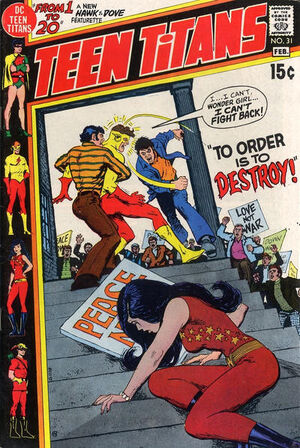 Appearing in "To Order is to Destroy"Edit

Synopsis for "To Order is to Destroy"Edit

Visiting the campus of Eliord University with his grand-father, Prof. West, Kid Flash intervenes to help a student being waylaid by a mob of fellow students. He discovers that, in an insane scheme to do away with student unrest and riots, a fraudulent college psychologist has been performing operations on students, attaching a computer circuit to their brains which turns them into mindless drones. The Teen Titans investigate, and with the aid of Johnny Adler, the student Kid Flash had helped earlier, they put a stop to the psychologist's mad plan and the students are returned to normal.

Appearing in "From One to Twenty"Edit

Synopsis for "From One to Twenty"Edit

Retrieved from "https://heykidscomics.fandom.com/wiki/Teen_Titans_Vol_1_31?oldid=1463044"
Community content is available under CC-BY-SA unless otherwise noted.