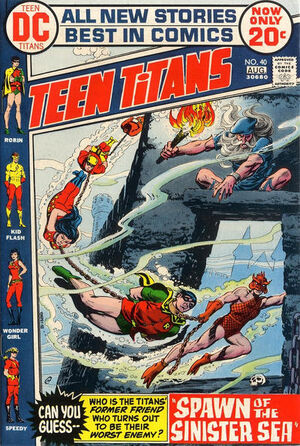 Appearing in "The Spawn of the Sinister Sea"Edit

Synopsis for "The Spawn of the Sinister Sea"Edit

In Scotland, the Teen Titans halt a scheme to use a fake "Loch Ness Monster" to rob fishermen, but are mystified when Robin and Mal are attacked by persons unknown while exploring underwater. Duncan Gillkrankie, an old fisherman whose boat Mr. Jupiter has hired, identifies their attackers as thralls of Black Moray, an ancient sorcerer whose legendary castle is said to exist sunken at the bottom of the loch. Gillkrankie is almost immediately attacked and drowned by the same mystery duo. When Robin learns that Aqualad is currently attending school nearby, he suspects their former teammate and his new girlfriend, Nirka McDuff, may be Black Moray's servants. Their suspicions verified, the Titans hold Aqualad captive, but he is soon freed by Nirka, who is revealed as Black Moray's sorcerous daughter, and who has Aqualad under an enchantment. The Titans manage to recapture and hold Aqualad while Black Moray's restored castle, together with the wizard and his daughter, sinks beneath the waves for another century. Aqualad loses all memory of what has happened.

Retrieved from "https://heykidscomics.fandom.com/wiki/Teen_Titans_Vol_1_40?oldid=1482467"
Community content is available under CC-BY-SA unless otherwise noted.