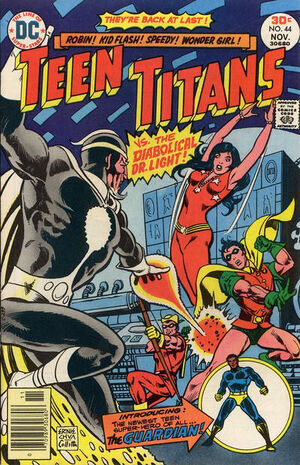 Appearing in "The Man Who Toppled the Titans"Edit

Synopsis for "The Man Who Toppled the Titans"Edit

Two years ago, the members of the Teen Titans formally disbanded in order to pursue their individual careers. During the hiatus, Mr. Jupiter closed down his training program and Mal was left in charge of the Titans' base and equipment.

When the members receive an emergency signal, which rallies Robin, Kid Flash, Wonder Girl and Speedy to their former headquarters, it turns out to be a trap set by Doctor Light, who intends to use the Titans as bait to trap the Justice League.

He easily captures Robin and Wonder Girl, then stops Kid Flash and Speedy before they can warn their adult counterparts of his plans.

Meanwhile, Mal, who also received an emergency signal, appropriates an exo-skeleton [1] and the Guardian's costume (left in the keeping of Speedy) [2] from the Titans' storeroom and becomes the new Guardian. Now costumed, he is able to free his fellow friends, and together they defeat Doctor Light and later revive the Titans team once again.

Retrieved from "https://heykidscomics.fandom.com/wiki/Teen_Titans_Vol_1_44?oldid=1524631"
Community content is available under CC-BY-SA unless otherwise noted.