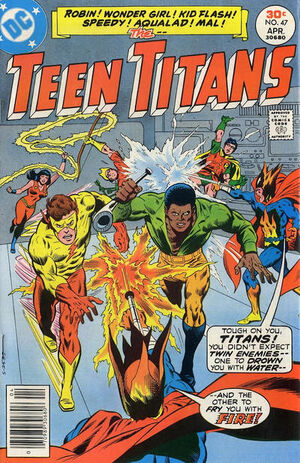 Something's wrong! These are the same crooks... and yet, their powers are different -- opposite!

Appearing in "Trouble -- Which Rhymes With Double"Edit

Synopsis for "Trouble -- Which Rhymes With Double"Edit

In New York City, a pair of costumed thieves break into the New York Philatelic Exhibition and steal the valuable 1856 "Penny Black" stamp. In Gotham City, a similar crime is being committed at the Gotham Stamp Society. This time however, the thieves steal replicas of actual vintage postage stamps rather than the real thing.

The Teen Titans are alerted to the robbery in Gotham and engage the villains. Wonder Girl and the Joker's Daughter find themselves waylaid by the mysterious Darklight while Robin unsuccessfully tries to subdue the size-altering Sizematic. Kid Flash is taken down by a pyrokinetic villain named Flamesplasher. With the Titans easily defeated, the criminals take their leave.

Later, the Titans reconvene at their new headquarters, Gabriel's Horn. The Disco/HQ is incomplete, and Speedy is chastised for hanging the outer sign on lopsided. The Joker's Daughter has another of her ESP visions and tells her teammates that the goons they fought earlier are preparing to strike again in New York. The team goes off to intercept, but this time, their adversaries demonstrate the exact opposite powers that they had back in Gotham City. Unprepared for such a threat, the Titans are easily defeated. Speedy accuses the Joker's daughter of deliberately giving them poor information, but she insists that her visions are accurate. She cannot explain why the villains' powers were different than they were earlier.

Watching a news broadcast, they discover that the villains are striking once again at the New York Historical Society. They scramble into action determined to stop these crooks once and for all. During the fight, they discover that the group that robbed the New York Philatelic Exhibition is a different group of thieves than the ones who struck in Gotham. They share similar names and costumes, but their powers are the exact opposite of one another. For example, the New York Sizematic had the ability to shrink in size, while the Gotham Sizematic could increase his size. The Titans put up a valiant fight and succeed in defeating most of their adversaries. Robin and the Joker's Daughter however are kidnapped.

Taken back to a secret lair, they discover the identity of the true architect behind these twin crime sprees - Two-Face. As per custom, Two-Face flips his special silver dollar to decide the fate of Robin and Joker's Daughter. The scarred side lands face up, meaning that Two-Face intends on executing the young heroes. The Joker's Daughter protests, citing that Two-Face wouldn't murder his own daughter. She then refers to him as "Daddy".

Retrieved from "https://heykidscomics.fandom.com/wiki/Teen_Titans_Vol_1_47?oldid=1482443"
Community content is available under CC-BY-SA unless otherwise noted.