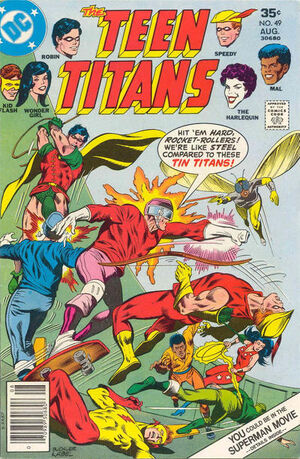 Appearing in "Raid of the Rocket-Rollers"Edit

Synopsis for "Raid of the Rocket-Rollers"Edit

After much preparation (during the previous two cases), the Teen Titans (in their civilian identities) open a restaurant/discotheque, Gabriel's Horn, as a "cover" for their new secret headquarters, only to have their opening night festivities invaded by the Rocket-Rollers, a criminal gang using specially powered skateboards. When the Rollers make a second appearance, the Titans are able to stop them with the help of new members Harlequin and Bumblebee, Mal in his new costumed role as the Hornblower, and a revived Aqualad. Immediately afterward, however, Aqualad falls ill once more, and Mal, his mystic horn having vanished, returns to his identity as the Guardian, claiming he is doing so to protect his true identity, since it is known that Mal Duncan and Hornblower are one and the same.

Retrieved from "https://heykidscomics.fandom.com/wiki/Teen_Titans_Vol_1_49?oldid=1463080"
Community content is available under CC-BY-SA unless otherwise noted.